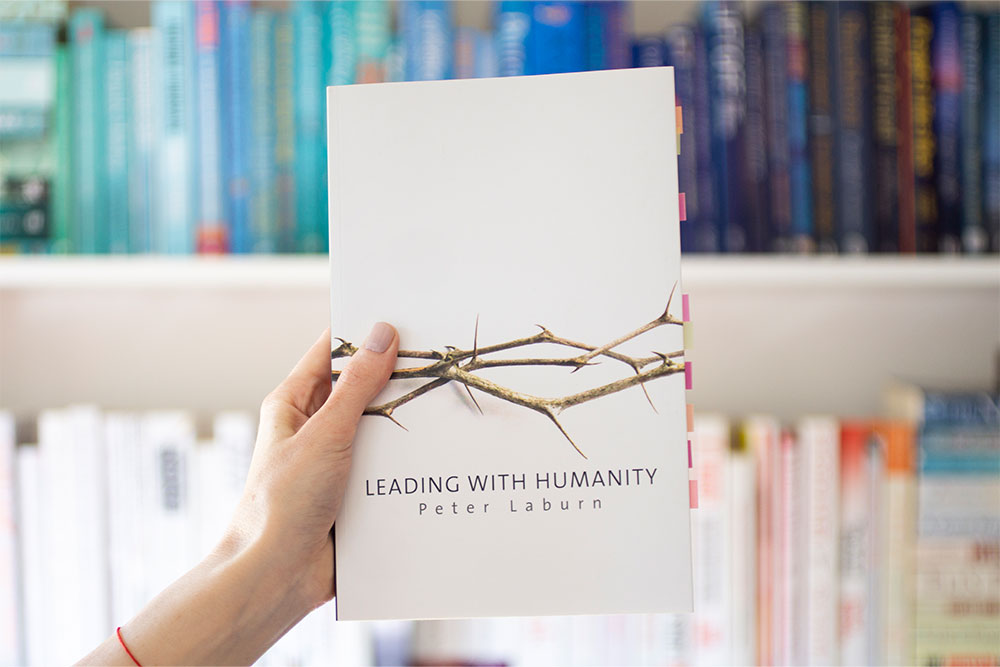 The book, Leading with Humanity, is written in an academic textbook-like style. It has minimal personal details and anecdotes from the author. Instead, what you get, are thoughts, research, studies, and the odd story that demonstrates the principles of Leading with Humanity. It’s a book that wouldn’t look out of place as part of a curriculum in a Business Management or Organizational Theory class.

Leading with Humanity according to author Peter Laburn is about understanding how to be a leader. Being a leader, he says is predicated on self-knowledge and being happy with your authentic self and then leading out of who you are. “We shouldn’t be different people in different circumstances…Leadership is the ability to influence others to voluntarily follow. In that sense, you better understand where others are at.  If you’re out of touch with them, you can’t hope to influence them.”

I recently chatted with Peter about the book, Leading with Humanity, and the advice he offers to those who are looking to make big career changes.

What inspired your book Leading with Humanity and what makes it different from all the other leadership books out there?

I’ve been a student of leadership for almost 40 years. Particularly during the last 30 years, where I’ve been consulting. About 20 years ago, we started offering retreats that began to look at leadership differently. It’s not about reinventing, it’s about rethinking it. I think we have lost sight of what quality leadership is. The attributes are centuries old; they go back to biblical times.

It’s a book that takes a refreshingly different look at leadership. In most leadership books, it’s about captains of industry, political leaders, people who have fancy titles. This is a book for everyone. It works off the assumption that no-one is born genetically encoded not to lead.  We all come out with the propensity to lead, yet research shows that very few of us choose to lead. We choose for a whole bunch of reasons, often thinking we’re not leaders. Some of the most influential people are stay-at-home mothers, schoolteachers, Gogo’s in our traditional cultures – people who don’t have fancy titles but are just out there making a difference. I see it a lot in our community in Durban where we’re doing a lot of work. It’s not the people in offices who are making a difference, it’s concerned citizens who are making a difference to the world they’re living in.

I wanted to write something that was readable, that is relevant across time, that’s not just about now. It’s not about me, it’s about the thoughts we’re invoking.

The other difference is that most leadership books are trying to tell you what to do to be a leader. This book is not about what you do, but who you choose to be. It’s leading from who you are. That journey of self-discovery, that self-awareness which is a fundamental building block of EQ. if you don’t have that, how do you lead?

In the book you say that leadership can’t be taught – that anyone can be a leader. Is this just a matter of anyone choosing to tap into the leader within them and leading from that authentic self?

100%. If you’re influencing others to voluntarily follow you, you’re leading. The best thing is to influence people out of who you are, authentically and genuinely. Once you tap into that and build the confidence to be yourself, you can influence. The world needs people who lead in the circumstances they’re in. The systems of the world are fundamentally broken and there’s no grand plan that is going to fix them. What we need is people making a difference in the circle of influence they have.

Would you say that Leading with Humanity has a feminine element to it that makes it different from how we traditionally look at leadership? It’s softer, more nurturing, more compassionate.

Yes and no. I think in the context of how leadership has been defined in the last hundred years, specifically in the Industrial Age, it’s been positioned as very masculine. If you go back to the Greeks, it was a balance of masculine and feminine. That’s what I’m calling for – let’s go back and look at leadership over the millennia. The thoughts I share on leadership are timeless. I think we have lost sight of what is real leadership in our pursuit of targets, objectives, productivity, and incentives. Yes, it does have a more feminine side to it, it has more compassion and is about leading with the heart and the gut as opposed to the brain. That said, I think that is how leadership was meant to be.

Throughout the book you speak about finding meaning in your life, finding purpose. Is that why Leading with Humanity is so important because it asks you to find your purpose and lead from there?

Absolutely, neuroscience has shown how impactful meaning is on our brains and on our whole body. There’s more science behind purpose and meaning. It’s also become more sought after.

You left the corporate world because you realized you were becoming someone you didn’t want to be. What advice would you give someone entering the workforce to ensure they don’t land up in a job that turns them into someone they no longer recognize?

It’s incredibly important to know who you are and what is important to you. For young people, it tends to be about money and success and possessions. You can chase it and you can work hard and earn lots of money, but ultimately, you’ll ask the questions, ‘Why am I doing this?’, ‘What am I mortgaging?’. I find this particularly so with people who have young families. Sometimes, you have to taste this life on the treadmill of doing before you really begin to grasp how unsatisfactory that life is.

What advice would you give someone who is at the stage where you were 30 years ago – unhappy in a job and looking to make a big life and career shift?

It takes incredible courage to do it. if you’re in a well-paid job, have a home with a bond, children at school and all these obligations, it’s extremely difficulty to leave. What I council people on is that if you’re unhappy doing what you’re doing now, what do you want to do about it. it might mean that it’ll take you a year or two of planning. You don’t just leave; you start thinking about it and decide what you’re going to do about it and over what timescale. Get intentional, get focused and then have the courage to plan.

Would you say that one of the keys to Leading with Humanity and one of the key things you are teaching people is to find their authentic self and to not view their job as their life but rather as a part of their life?

In our weeklong course, Leading with Humanity, we ask people to write their CV forward. One that has nothing do with what you want to do in life, but who you choose to be for the rest of your life. Whatever work you do, make sure it allows you to be you.

What is the best lesson you’ve learnt about leadership?

Interview has been condensed for clarity.

On Our Bedside Table: Friends, Fans, Outcasts and Shadows