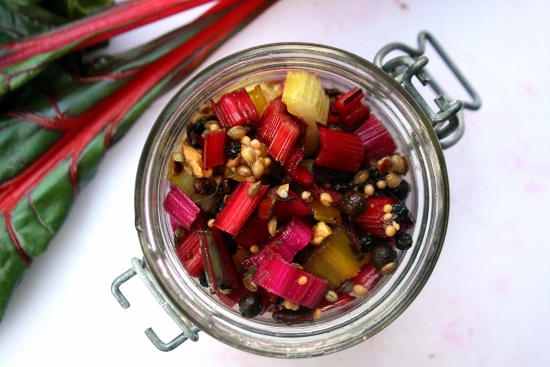 Swiss chard has been ranked second, under spinach as one of the most nutrient dense vegetables. With a nutritional profile which includes Vitamins A, C, E and K; minerals Magnesium and Zinc as well as calcium, iron and a slew of antioxidants it’s easy to see why this green ranks so high.

Rainbow Swiss chard tastes like regular Swiss chard but has bright coloured stems in oranges, yellows, reds, pinks and purples as opposed to the white stems of Swiss Chard (which makes eating them seem more fun). Often, we eat the dark leafy greens and discard the stems; that is until we discovered we could turn them into pickled chard stems.

Pickling the stems of swiss chard gives a new life to an otherwise overlooked part of the vegetable and make for a great salad topping. We used rainbow swiss chard stems which makes for a more colorful pickling; but regular chard stems would work as well. 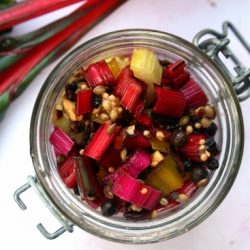 Tracy Zunckel: Running for the Love of it