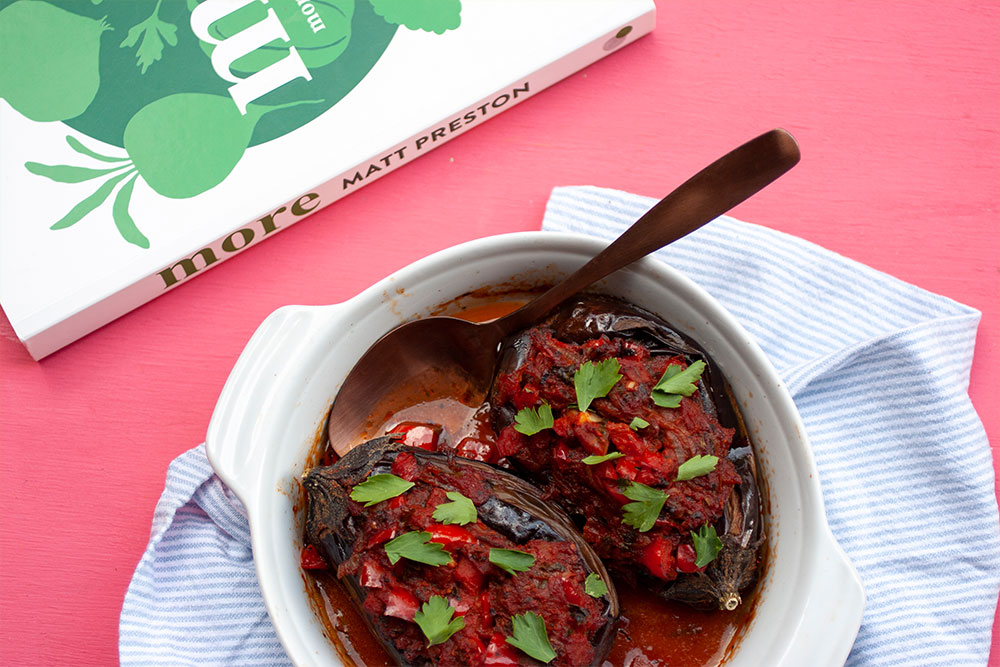 His 7th cookbook – More, Preston says, is about joy, written for those who love to eat, make meals and know that food is more than carbs and proteins and fat. It’s a way us humans connect. His intention with this cookbook is to get people to cook with more vegetables. The recipes in the cookbook are either vegetarian or vegan, but he does include a chapter at the end with cooking basics for poultry, meat and fish along with spicing and cooking ideas. It’s a cookbook that’s not about restriction or judgement. If you’re vegan, there’s plenty to choose from and most recipes can be easily adapted to be vegan friendly. If you’re a meat eater looking to introduce more vegetables into your meals, he includes what proteins go well with what dish. But mostly, it’s a cookbook that celebrates vegetables.

It’s also a cookbook with an enormous personality. It’s the cookbook you want to read cover to cover, not missing out on any recipe introduction, because that would mean missing out on one of Preston’s foodie gems like his description of the Blessed Brazil Rice Bowl. “I have a sneaking suspicion that the whole bowl thing may be over, but that might break the heart of my publisher who still loves them and wanted this section in this book. I have demurred because I think that doesn’t make them any less delicious or superbly suited for the Australian climate and not because she’s the one writing the cheques”.  My love of bowls is well documented, so no, I do not think bowls are over. Not if I have anything to say about it.

Don’t get me started on the recipe names – (She was an…) American Bowl, The Devil’s Miaow, Smash ‘em Green Fritters and The Name Dropper’s roasted couscous royal. Tell me you’re not curious to know what those are? I laughed my way through the cookbook, as Preston’s sense of humour bursts through each page.

On a serious note, the recipes are truly a treat. As I do when I go through all cookbooks, I had my little bookmark stickers and bookmarked each recipe I wanted to try. Over half the cookbook has stickers coming out of it and within a week of me receiving it I’d made two recipes. Thus far I’ve tried the easy carrot chickpea curry, the mushroom stroganoff with parsley flecked noodles and a simple beetroot orecchiette that has inspired me to start making my own pasta, because his recipe was actually simple and very doable. On a side note, rolling out pasta makes for a lovely load shedding activity.

Many of his recipes, however, do use specialty ingredients like saffron threads, miso paste, tamarind puree and the like. Bear in mind that Preston is a MasterChef judge and those additions should surprise no one who’s ever watched MasterChef, looked at the “limited pantry” and thought they are using the term limited incorrectly. That is a dream pantry. It is always nice to be exposed to new ingredients and flavours, especially when they come with recipes on how to use them.

As I love to do with all cookbooks, I’m sharing a recipe with you. It’s his recipe for Imam Bayildi– the best eggplant dish ever… from Turkey. With such a bold declaration you can’t not want to make it and see if it holds true.

Turns out it’s a great eggplant dish. The secret is that filling, which I’ve made alone and stuffed in omelettes. It’s a great side dish to add to a meal (a holiday meal if you will) and one both vegans and meat eaters will enjoy.  I did omit the Greek Yogurt topping, but I’ve included those in the recipe should you want to try it out.

When you serve it, do as Preston instructs and tell your fellow dinners about how this dish got its name from the way the Imam literally swooned over it when he tried it. Just Don’t go into the politics of spices… 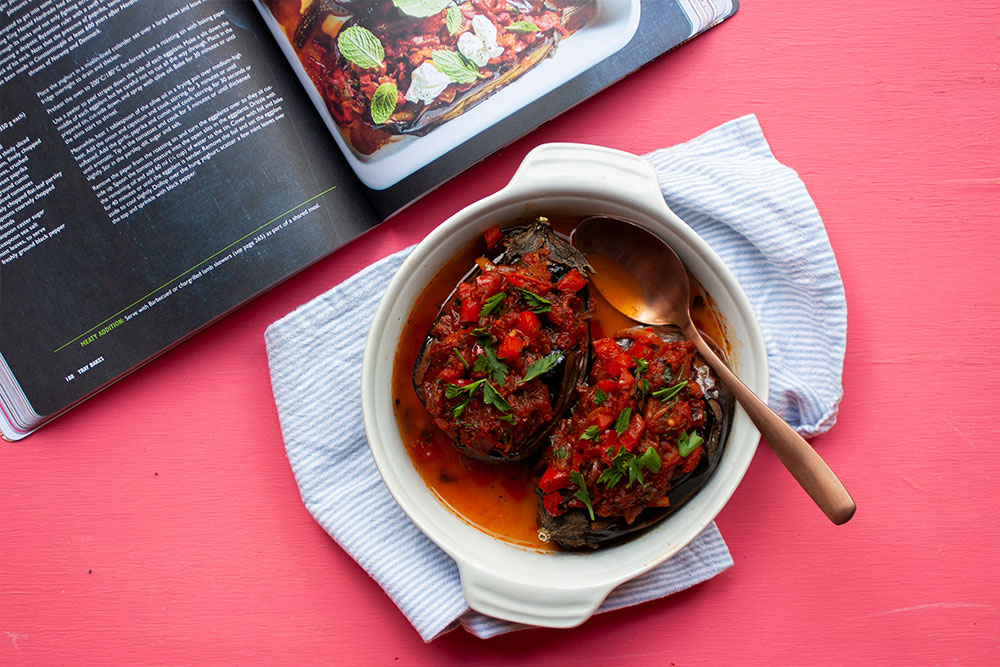 Print Recipe
The best Eggplant Dish from More, a Cookbook with a Big Personality
Imam Bayildi is a stuffed eggplant dish from Mat Preston's new cookbook, More. It's easy to make and bursting with flavour! It's the perfect side dish to add to a meal. 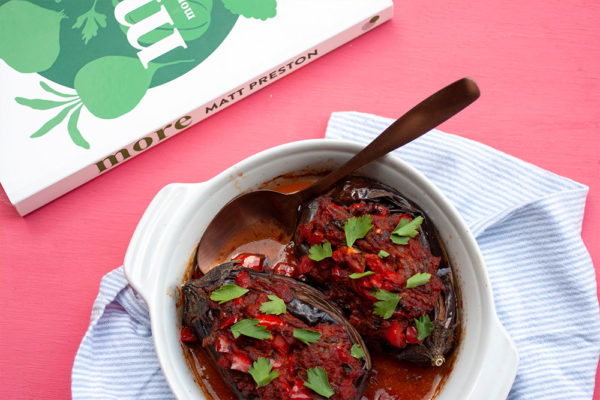 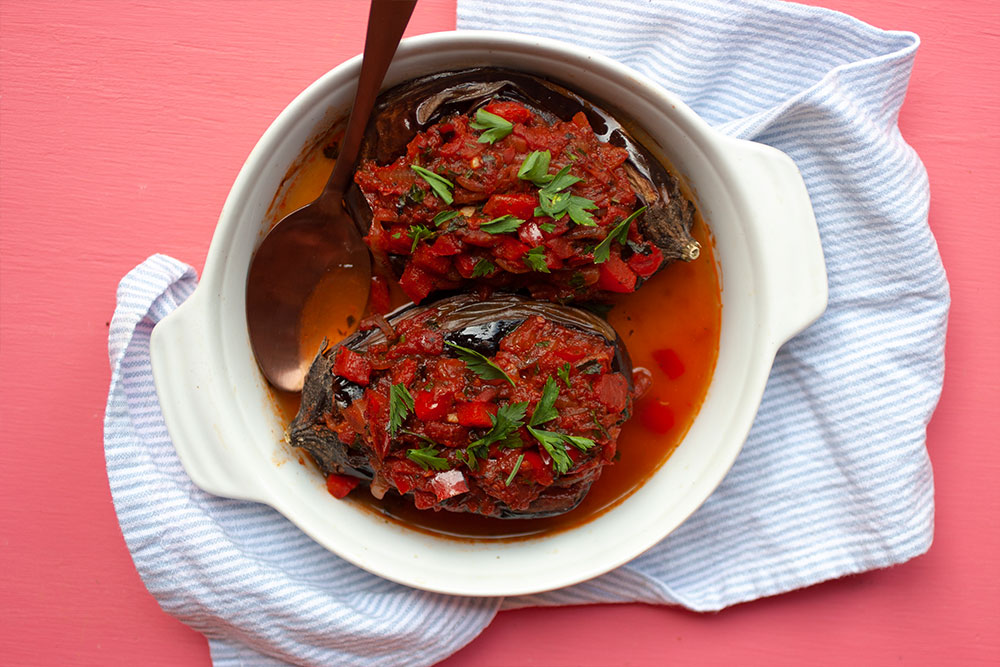