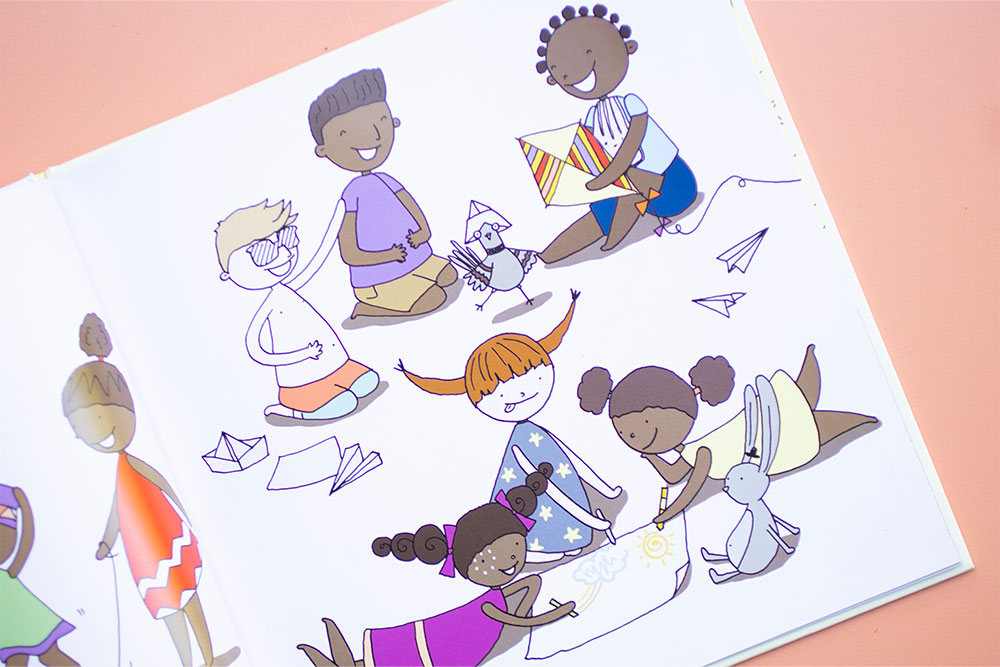 I meet her on Zoom, the go-to virtual meeting place of the last year, to discuss her book and journey into becoming a children’s author. I instantly like her, she’s friendly, bubbly, and chatty and matches what I expect a children’s author to be.

Born in Mthatha in the Eastern Cape, Refiloe spent her first 10 years there, before moving to Johannesburg to live with her aunt and Uncle who adopted her after her mother passed away.  Refiloe recalls her early love of books, practically living in the library and devouring classics like The Secret Garden at just 8 years old, followed by Harry Potter, which remains a firm favourite. Her parents and family, she says recognized her love of reading and encouraged and supported it. Her uncle, she tells me, gifted her an entire suitcase filled with books, when she went to Stellenbosch for boarding school in Grade 8. As a young adult her aunt would buy her books, to match the life stage she was in, and write little messages inside the covers.

By 19, Refiloe knew she wanted to be a writer. The how, what, and when wasn’t yet clear. It would take her 7 years and a detour into the corporate world before she would take the leap to becoming the writer she dreamt of.

After high school, Refiloe completed a BCom in information systems where she received a bursary from Vodacom called the Graduate Program for Females in Technology. She spent 5 years working at Vodacom, first under Vodacom business in South Africa for three years, followed by a two-year stint with Vodaphone India. India had a huge impact on her life. It was a challenging assignment and was the first time she stepped away from the comfort zone of home and what she knew. “At the end of those two years I thought if I made it through this, surely I can go after my dreams.”

And go after them she did, she returned to South Africa and made the leap into writing. A move that was further inspired by Eat Pray Love by Elizabeth Gilbert “When I read the part where she describes her life as a writer – it resonated with my soul.”

Refiloe completed a writing course where she met Mia, the facilitator who would become the first person she sent a draft of How Many Ways Can You Say Hello? to. The feedback she got, she says, was profound. “[Mia] said if you’re going to rhyme, rhyme. Do it perfectly and don’t mix. She gave me a list of children’s books to study and that was mind-blowing. I learnt it was an art. The messaging is profound in kids’ books.” 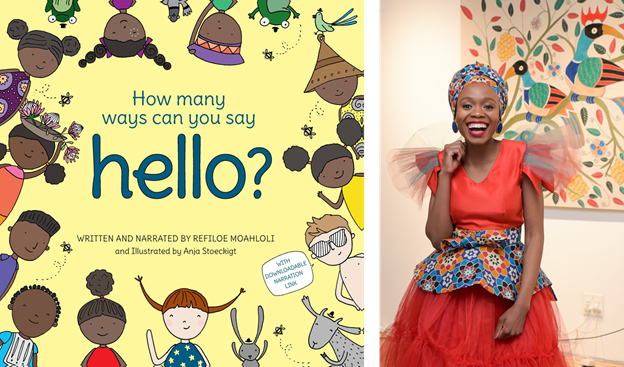 I wanted to know where the inspiration for How Many Ways Can You Say Hello? came from. The idea, Refiloe said, came from her own life and the time she spent with her nieces and nephews.

“[I’ve observed] them since they were babies, living at home and being exposed to their mother tongue to growing up and going to school where they were exposed to new things and [the] English [language]. My niece in particular. I observed her losing the language.  English becomes the common language. They’re taught in English, everyone speaks English. I thought, how do we retain our language and more importantly for kids, retain pride in our own heritage. That’s always been something that stayed with me.”

A conversation with her aunt about allowing kids to keep the essence of who they are, their language and their culture would ignite that initial spark. Her aunt, now a retired lecturer speaks 6 out of the 11 official languages. She told Refiloe that when teaching she would tell her students that although she taught in English, they could come to her after class if they didn’t understand anything. She would, she told them, explain it in a language they were able to understand.

“I thought that at the very least we should all be able to greet each other in our mother tongue. If when our children get to school, they greet each other in their mother tongue, [that already brings] who you are and your background into that space. The biggest thing was that they share their background with each other and their language with each other – then it becomes a space of exchange. That’s where the idea for how many ways can you say hello came from. At first it was personal, I wanted to create an opportunity for my nieces to celebrate who they are. That wherever they go into the world that they bring who they are with them and they’re proud of that – so proud that they share it with others. The more I worked on that I realized other kids have a similar situation. [I] wanted to create a story where the kids are in exchange with each other. Not only do I celebrate my own language and culture and heritage buy I also celebrate others. That was the main theme and idea the book is about.”

She brought that book to life with the help of illustrator Anja Stoeckigt, who she came across on Facebook, back when it was a place of real connection and discovery. “I saw her illustrations and something in me resonated – the gentleness, the fluffiness, the childlikeness.” She went to stay with Anja in Cape Town, and they got to know each other. Refiloe giving guidance on the places and landmarks the children would visit, and Anja brought it to life.

Even before it was published, Refiloe says she knew she was onto something. I ask her If she expected it to do as well as it has and hesitating for less than a second, she says “Yes” and then pauses to clarify.

“I didn’t have a picture of how it would unfold. But I knew it would do well because whenever I spoke about it and told someone about the idea or concept, a light would go on in their eye. Every person I spoke to. That feedback gives a resonance of ‘I’m on the right track’. Because it was resonating with many people, I knew it would do well. It wasn’t just a challenge in my own personal space, it’s a South African challenge – how do we work with our diversity.”

The award she never predicted “when I heard I won the award, I was screaming, I didn’t predict that”.

It’s a book that’s resonated with so many people and when pressed as to why Refiloe says her intention was that children – both children and the inner child in all of us – could find themselves in the story. She says that when she would go to schools and introduce herself – “I’m Refiloe, I come from the Eastern Cape, I speak isiXhosa”, immediately a child would get excited – they too spoke isiXhosa at home. It’s that thread she says, of being able to identify with a story. “It’s the simplicity of connection. It’s connecting to the theme and the humanness of the story”.

It’s a book that resonates because it represents all South Africans, which is no small feat to accomplish. But even those who don’t speak one of the 11 languages represented in the book, feel connected to the story

“I went to a school and there was a girl from Japan and something about the book made her feel like she had to share about herself. [she was a girl who rarely spoke and] she got up and she taught us how to say hello in Japanese. While it’s a book about the official languages of south Africa, in a bigger sense it’s a book that says what do you speak, where do you come from, share it with others. The book gives you permission to tell others about yourself.”

The follow up book to How many Ways Can You Say Hello? is How many Ways Can You Say Goodbye? which came out this year. It took four years to get off the ground and Refiloe explains that it’s not just about saying goodbye but about the emotions that come up when we say goodbye.  The book addresses those emotions and teaches the lesson that “Goodbye is also a beginning and not just an end, soon we’ll say goodbye to each new friend”. When the last child is left, there is an aloneness and sadness that comes with it, and we address that. “Instead of allowing that aloneness to form a storm in your heart, we express it. If you’re feeling sad tell someone.” There’s an element of Emotional Intelligence in the book, which is explained in a way a child would understand.

it’s a book that says what do you speak, where do you come from, share it with others. The book gives you permission to tell others about yourself.

That complexity of creating stories that are captivating yet meaningful and short enough for a young reader’s attention span are part of the challenge and the mark of a good children’s author, something Refiloe is cognizant of.

“For me it is how do you say so much for so few words? I will never underestimate that. It is an art. How do I capture the attention, imagination and say something useful with a limited number of words? The length of time, effort, and dedication it takes to bring a children’s book into being would surprise people. It’s a privilege I don’t take lightly – being able to communicate with children”

Refiloe shares that the surprising thing about each of her books is how much of a healing process they are to her. “To write for children, I needed to connect with my inner child. And I write things that are important to my inner child – that I’m working on”. How many Ways Can You Say Hello? was about how she could keep that thread of my heritage and celebrate it. Her book Tallulah is about bravery, stepping out and challenging the status quo. In How many Ways Can You Say Goodbye? which tackles goodbyes she was able to work through her own journey of saying goodbye through the book.

As I work on these [books] I heal the part of myself that needed to hear that message.

The above is a condensed version of the conversation I had with Refiloe. Ndinombulelo, Refiloe for sharing your story with us.

On Our Bedside Table: An Artist, a Survivor, an Adventurer, an Explorer and a Leader