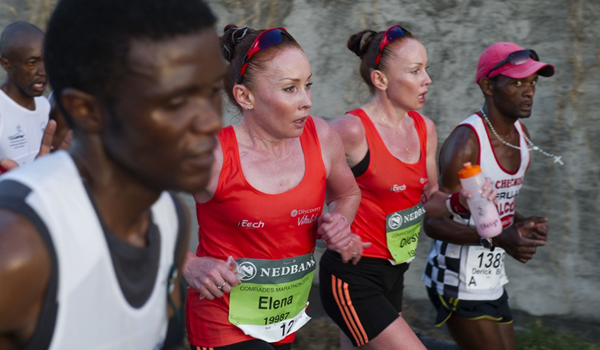 Yesterday was the 91st Comrades Marathon and it unfolded with all the drama and history making moments of a great race.

The women’s race, while not record breaking will go down in Comrades history for its dramatic ending as Charne Bosman took the lead with just 2km to go. And of course, undoubtedly the woman of the day – Caroline Wostmann, who held onto the lead until 2km to go despite severe cramping from 60km. Viewers sat on the edge of their seats as she battled it out, falling over numerous times, bumping into a motorcycle and limping her way through to one of the most epic 2nd place finishes.

As this was all unfolding, most of us barely noticed that there was not a Russian anywhere near the top ten. Conspicuously absent were the Russian Twins Elena and Olesya Nurgalieva who have been a Comrades fixture for decades. In addition a quick look at this year’s race reveals that only 15 Russians took part, the fastest, a male coming in at 6:51:05 – over an hour behind the top 10.

Where were the Russians this year?

In 2014, German journalist Hajo Seppelt broke news of a widespread doping conspiracy in Russian long-distance running. This scandal led to an IAAF (International Association of Athletics Federations) ban on the The Russian Athletics Federation from all international competition. All Russian elites including the Nurgalieva twins are affected by this ban which excluded them from participating from the 2016 Comrades Marathon. The Nurgalieva twins, upset about having to miss this year’s Comrades are hoping for a 2017 return.

Despite the lack of Russians, the 2016 Comrades Marathon was a brilliant race, as predicted by Comrades Marathon Race Director Rowan James who said “Russians or no Russians, it’s still going to be a great race”. Boy did our South African athletes deliver – well done!

Did you watch the 2016 Comrades Marathon? Share your favorite moments in the comments.