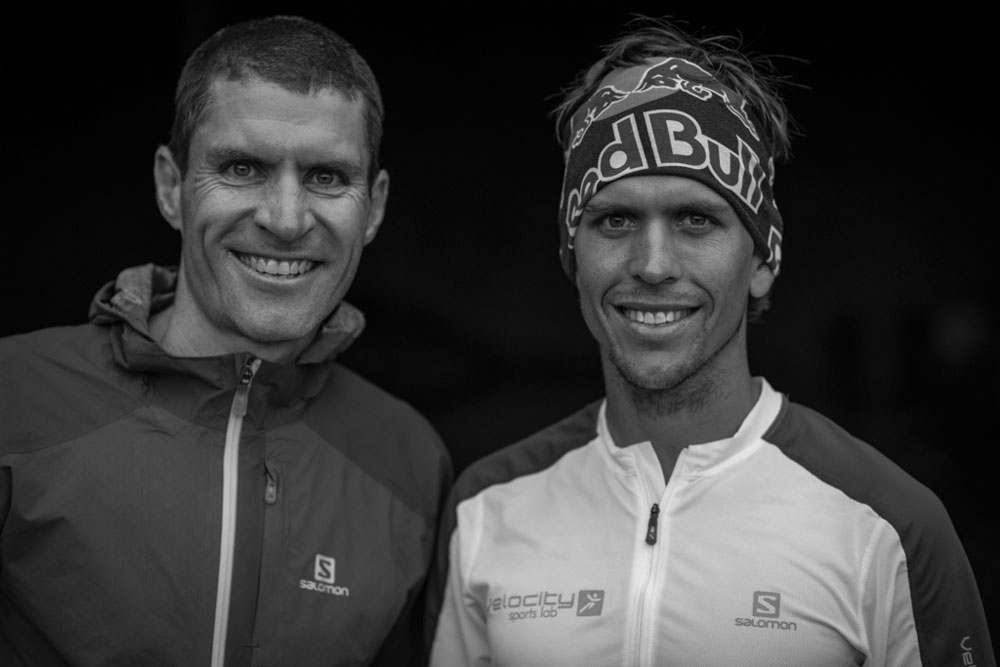 In 2014, Ryan Sandes and Ryno Griesel ran 220km across the Drakensburg Grand Traverse in 41 hours and 49 minutes, smashing the previous record of 60 hours and 29 minutes.

This year, they’ve taken on a challenge much larger. The holy grail of trails – the Great Himalaya Trail. In March they will embark on a challenge over 1400km long in the hopes of conquering the Great Himalaya Trail in the fastest known time. The current record for the fastest time is held by South African, Andrew Porter who completed the trail in 2016 in 28 days, 13 minutes and 56 seconds.

To beat that record, Ryan and Ryno are aiming to complete a trail that takes the average person 5 months to walk, in under 28 days. Following the same route as Porter did, they estimate they’ll cover an ultra-marathon a day for 28 days, dealing with breathless levels of altitude, with 68 500m of ascent and 70 000m of descent.

The idea for the challenge they both say, wasn’t a grand moment but rather something that evolved out of many runs together.

“Ryan and I both love big mountains and have a passion and respect for the Himalayas”, says Ryno. “I can’t recall an exact moment – rather a crazy concept that developed over many runs together in some local mountains. Ryan is generally known for his out-of-the-box ideas – so I will blame him. There is no big WHY for me but rather grabbing an opportunity to experience a great mountain adventure with my best friend. We live once only!”

For Ryan, this was always an epic project to do one day and that one day came now. “I can’t remember the exact moment, but we have definitely discussed it before and always thought it would be this epic project to do one day. I guess that one day came now. I’ve done a lot of racing the last few years and am really keen to do a crazy adventurous project”

Before they head off to Afriski for some altitude training, I caught up with Ryan and Ryno to find out more about this insane challenge, training, support and what advice they’d give to the next generation of trail runners and adventure seekers.

On training, planning and recovery

With neither of them having ever attempted something this big, Ryno says it’s hard to know if they’re physically prepared for a project of this scale, but that’s what makes it so exciting.

“We know we must be running fit and build in some good climbing sets and over-all body strength. We hope that many years of different types of endurance sport will also help prepare us for the expected duration on our feet and that a sense of humour will make up for the rest”

Ryan believes they’ve been training for this their whole lives.

“It’s been a long-term progression. At the moment we’re trying to get the balance right of getting in shape fitness-wise, but also not doing too much because you want to go into the project being really fresh.  Realistically we’re not going to move very quickly. It’s like being a diesel engine and continually moving”

Part of the training has included strength work and getting used to running with trekking poles they’ll be using throughout the challenge.

The challenge, they explain is not completely self-supported. There will be 4 to 5 drop points approximately 250km apart along the way where they’ll be able to pick up spare gear, changes of clothing and shoes, as well as permits needed to enter the next National Park. These drop points are organised with Nepalese Logistics company “Himalayan Trails”. In addition, there will be live tracking and Red Bull will be filming the entire thing.

They will only be carrying on them the kit they need for each specific section between exchange points and some basic nutrition like Electrolytes and Rehydrate.

Ryno explained that they won’t carry tents or sleeping bags and plan on sleeping in villages along their way “We will rely on the hospitality of the local friendly Nepalese people for food as we pass through their villages”. As a precaution they’ll carry basic bivvy bags to sleep in if need be.

In terms of planning the stops and resting points, that will be decided as they go along. Ryno explained that it’s almost impossible to plan the sections between sleep before-hand as there are so many variables that play a part. “Since we will rely on the Nepalese villages for food and accommodation, we will listen to our bodies as we go through them to decide if we push on or call it a day”.

They have a basic plan in place and have planned the basic sections, says Ryan but will have to think a lot on their feet.  “If we get to a tea house at 4 in the afternoon and are really tired and need to take a break we might spend the night there. But if we get [there] and are feeling good and know we can get to the next tea house at a reasonable time we may push on or keep going through the night. We’ll have a basic plan in place and break the different sections down but daily we’ll have to think on our feet and plan it as it goes. For recovery it’ll be crucial not to get too far ahead of ourselves and start off too fast and take it as easy as possible on those early stages”.

Another key to their recovery, says Ryno will be hydration.

“I think hydration will play a large role in recovery, so lots of tea and water before we go to sleep”.

The one item they never leave on expeditions without

Ever so practical Ryan and Ryno both listed sunscreen as their key item. Ryan also added an anti-chafe stick as “any two of those can very quickly end your trip or project or make it really difficult”.

They’ve never done anything so big or covered such an enormous distance on their own two feet. It’s an incredible physical challenge, but Ryno thinks it’s more of a mental challenge than physical.

this challenge will be 90% mental and the other 10% physical

“As cliché as it sounds –  I think this challenge will be 90% mental and the other 10% physical. We are both entering complete unknown territories of our physical limits and will have to rely on the foundation of our friendship built from previous “epics” to find solutions on-the-go”.

On being a good Team

It’s both their common ground and individual strengths that makes Ryan and Ryno an unbelievable team when it comes to taking on and conquering extreme challenges.

“We’re both fairly different but share the same goals, enjoy the mountains and are fairly comfortable around each other and that helps”, Ryan said. “The differences we have almost enable us to form a good team together. One of Ryno’s strong points going into the Himalayas is he’s really strong at altitude and navigation and that is really brilliant for me personally. I think I’d probably be running around in circles if I had to do the navigation myself so I’m lucky to have someone with the navigation ability of Ryno”

Ryno agrees saying “We share similar goals – and that is to live life to the full and to believe that nothing is impossible. We both have a passion and healthy respect for big mountains and each other. We are however very different as well. Ryan is a world-class athlete and I cannot come close to his physical abilities. He is also the nicest guy you will ever meet and super supportive during our Adventures! I bring some accounting and navigation to the team”.

On Family and Support

While it may be the two of them taking on the Himalaya Trails, behind them are families who provide invaluable support which allows them to take the time off to live their dreams.

“I am extremely grateful for the support from my family, friends and work colleagues. Especially towards my very patient and supporting wife Angela”, says Ryno. “I realise that these projects are very time-consuming, often selfish and dangerous. I am super blessed to be married to Angela who understands that it is in fact these challenges that make me come alive! I do hope to be of similar support to her in chasing her dreams!

Likewise, Ryan credits his supportive wife Vanessa and family for standing behind him. “I am lucky that my wife is super supportive and my family too. It obviously makes a big difference and helps me to do a challenge as mammoth and crazy as this”.

When asked what advice they’d give to the next generation of trail runners and those who want to achieve their dreams, they both believe in action.

It’s important to have structure in place to achieve those goals otherwise you’re never going to achieve them.

As for Ryan, he believes in living each day to the fullest and not pushing off dreams. “Make the most of every moment and live everyday as if it were your last. It’s easy to say let’s leave it till tomorrow. It’s easy to put things off. Go out and do it. It’s important to have dreams and goals and put a basic plan into achieving those dreams and goals. You need to start somewhere and have lots of mini goals leading up to your main goal. It’s important to have structure in place to achieve those goals otherwise you’re never going to achieve them.

Ryan Sandes and Ryno Griesel will be embarking on their attempt to break the fastest known time for the Great Himalaya Trail in early March 2018. Their attempt will be live tracked and filmed so you can follow their journey. For more details and see what they’re up to, follow them on Facebook, Twitter and Instagram @RyanSandes and @Ryno_Griesel

Some answers have been condensed for clarity

[GIVEAWAY] Everything you Need to smash your 2018 Goals