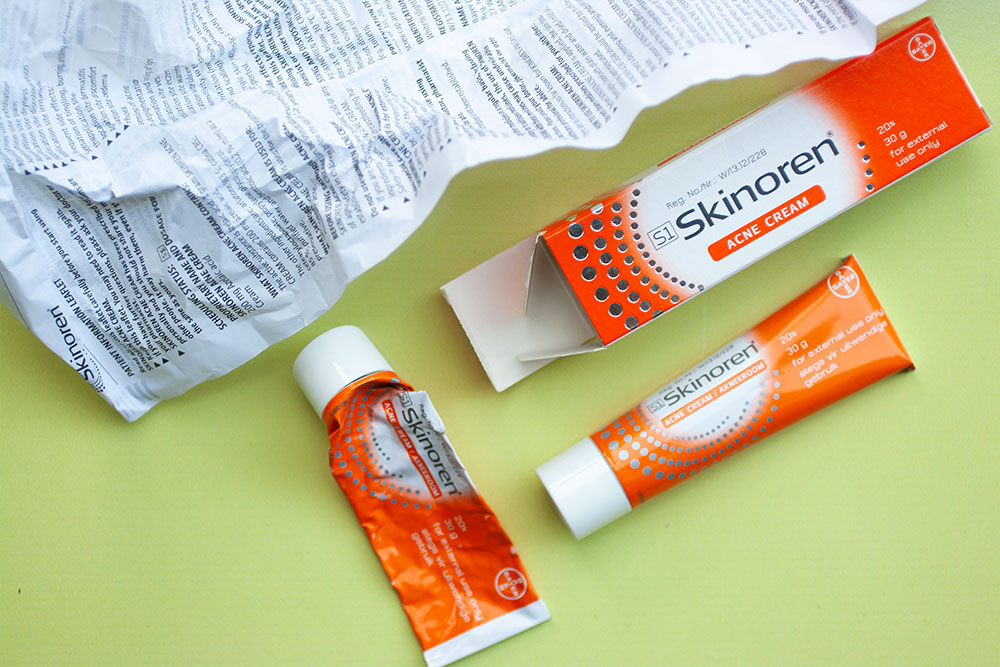 If you’re here just for the Skinoren review, feel free to scroll down because my review comes with a heavy side of story time. Grab a coffee [and a snack] and settle in.

In February this year, I shared my year-long struggle with adult acne. I had had enough and was determined to go on a journey of trying to cure the cause, which of course I had full intentions to share as a series.

That series didn’t happen and as much as I would love to blame Covid19, truth is I didn’t share because I had become disillusioned by everything I was trying. In my quest to get to the bottom of why I was breaking out;

I thought about when my breakouts first started happening and tried to put my finger on something that may have triggered it. After much thought, I realised it coincided with the first time I donated blood. At the time I only-just met their minimum weight requirement, but it was a cause I felt passionate about contributing towards and I was determined to do it. Even after feinting right after the first donation and feeling traumatised, I returned twice more that same year. It was only when I passed out during my last donation that I decided my body wasn’t handling them well and I probably needed to gain a few more kilos before attempting it again. These donations for sure put a stress on my body and I thought about the 56-day waiting period needed between donations to allow your blood time to regenerate.

I am no doctor and no scientist and despite looking, found no research to back up my theory, but, I started thinking what if the stress of the first donation caused the first breakouts and then the lack of allowing my body ample time to regenerate red blood cells contributed to not enough oxygen getting to these “damaged” skin cells, affecting the skin’s circulation and ability to renew itself?

I decided to give up experimenting and just let nature take its course. After a month or so I still wasn’t seeing improvements and was getting frustrated. I was considering seeing a dermatologist, but I didn’t want to be put on antibiotics and mostly I didn’t know who to go to.

Then Camilla from All Dolled Up shared her skin journey on their Instagram page and it sounded like my skin issues were similar. She also kindly shared the products her dermatologist prescribed, and one happened to be an over the counter product called Skinoren which I had never heard of before. Skinoren is high in Azelaic Acid, and when she mentioned pHformula’s CR range as helpful, a lightbulb went off in my brain. pHformula’s CR range is high in Azelaic acid and my skin was doing it’s best during my pHformula trial. Skinoren came highly recommended by her derm and the people in the comment section, so I figured trying it was virtually risk free, the only thing I had to lose was roughly R300 and a whole bunch of pimples. 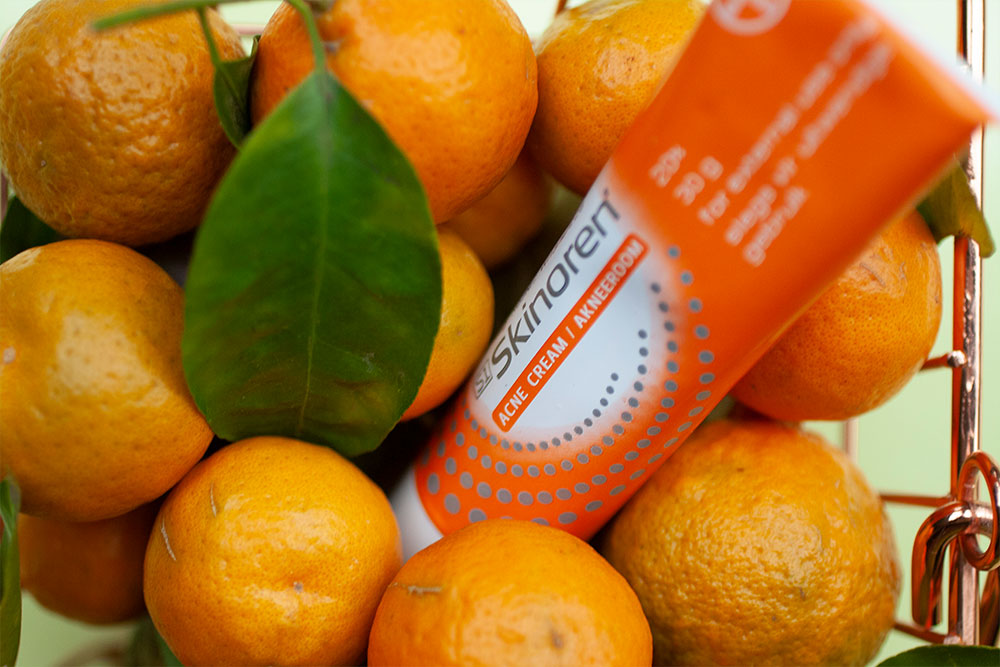 Skinoren is a schedule 1 acne cream, prescribed for mild to moderate acne. It is available over the counter at Clicks. It comes in a 30g tube and is a white opaque creamy formula which is easy to apply and blends into your skin.

How much Does Skinoren Cost

At the time of this review, I purchased a refill tube for R295.

What are the Ingredients in Skinoren

Skinoren has the shortest ingredients list of any skincare product of I tried, with most being the substances that give the cream its consistency, shelf stability and moisturising properties.

The active ingredient in Skinoren is Azelaic acid. 1g of cream consists of 200mg of alezaic acid. It also contains  arlatone 983 (an emulsifier), Cutina CBS (a wax mixture), cetearyloctanoate (an emollient which helps with skin conditioning), propylene glycol (a humectant), glycerol 85% (another humectant), purified water and benzoic acid (o.2%/m.m) as a preservative.

My Experience and Skinoren Review

The package insert states that Skinoren acne cream should be applied to the affected areas twice a day. Before applying, your skin should be thoroughly cleansed with water or a mild cleaning agent and dried. It then states that improvements become apparent after about 4 weeks but to get the best results, it should be used continuously for a few months. It has been tested for a period of up to a year. Based on this guidance I decided that;

The package insert also warns that common side effects include application site burning, tingling, exfoliation, dryness, discoloration, and irritation. It sounded exactly like what I experienced every time I used spot treatments (be it salicylic or benzoyl based) so I wasn’t worried and was expecting them all.

The first shock was that, except for light tingling the first few times I applied the cream, I experienced none of the symptoms.

The second shock was despite me doing my Skinoren review trial during Joburg dry winter and using no moisturisers, my skin felt incredibly comfortable with no feelings of dryness and tightness. Considering how much I have suffered with dry feeling skin during winter over the past few years this was a real win and I chalk it down to the formula of Skinoren cream.

Despite them saying results only occur after 4 weeks, from day 1 I knew it wasn’t aggravating to my skin and very early on, in week 2 maybe, my skin started calming down. Little by little the breakouts disappeared and although I’d get a pimple here and there, when I applied skinoren to a new spot, it always disappeared within 1-3 days leaving no scarring marks behind.

By the end of the third month my breakout hotspots had cleared (unfortunately the red pigmentation scars were still present) and I was sure some marks had lightened. I would have continued on this journey for longer but around the 8-week mark Bioderma sent us their new Sebium Peel to test so I figured that a 4-week break would be a good test to see what happens to my skin.

Unfortunately I didn’t think to take formal before and after photos in the same position and lighting but I did snap a few selfies right before I started and I took formal photos after, so below are before and afters of each side of my face. As you can see it didn’t magically clear the pimples, I actually got a new one the night before taking the after photo, but on the most part, what was left on my face was pigmentation scarring marks rather than angry bumps. 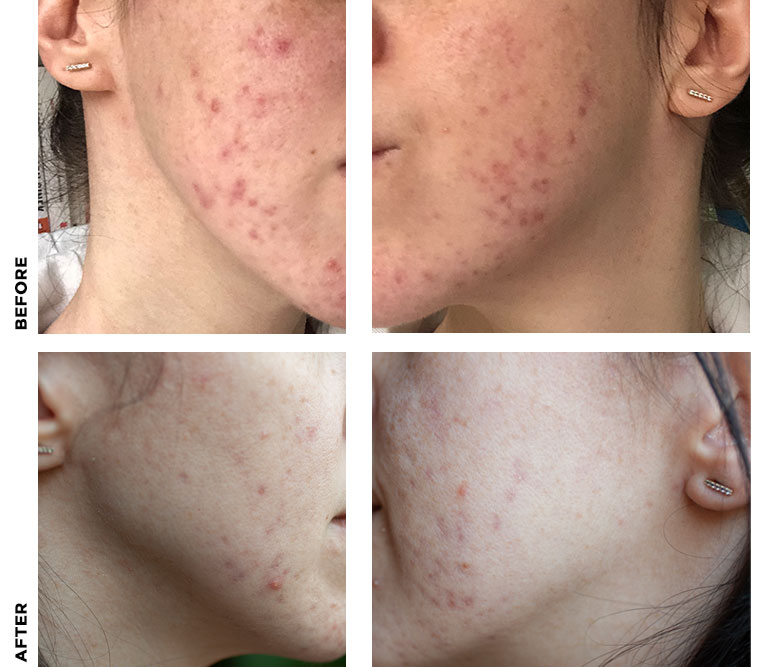 Luckily the tube of Skinoren I purchased just about lasted the full 3 months. I only applied twice a day for the first 4-weeks and then scaled it back to only once at night. I did however need to apply it virtually to my whole face, so if you only get pimples in a small area, this tube should last you longer.

Would I recommend Skinoren

Hell yes. So much so that I purchased a second tube even though I knew I wouldn’t be using it for 4 weeks. I don’t think I will ever not want to keep a tube of Skinoren on hand, if only for how amazing it is at clearing up new pimples quickly.

I fully intend to go back to this simple Skinoren skincare routine after my trial of Bioderma’s Sebium peel and maybe just maybe over time it will completely fade my pigmentation marks too.

If you got through this full review and story time, well done and thank you ? If you enjoy my essays and want to find out how the Bioderma Sebium Peel test goes and how I plan to clear my pigmentation scarring subscribe to our newsletter and or follow us on Instagram. As always, if you have any questions or want to share your skin stories, leave a comment below!

Testing the Most Supportive Sports Bra from Body Kind