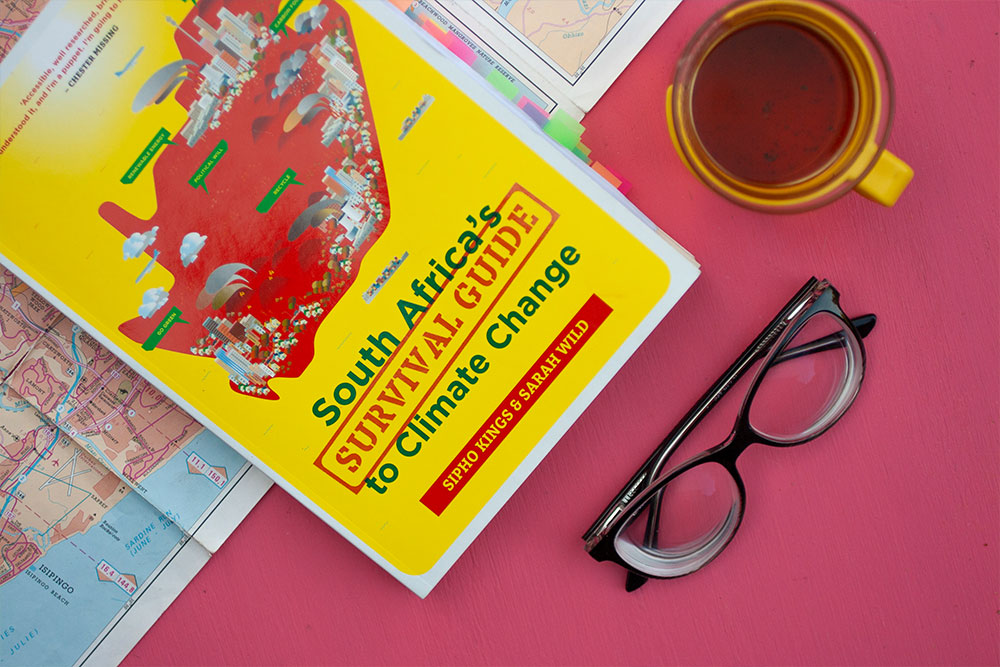 “Climate Change may be the greatest challenge that humanity will ever face. The decisions we take around it – or fail to take – will determine what the future looks like not only for us, but for most living beings on the planet”.

The above paragraph opens the final chapter of South Africa’s Survival Guide to Climate Change and was perhaps the motivation behind this book. It’s a brilliant educational book written by Sipho Kings, an environment reporter and current news editor of the Mail & Guardian, and Sarah Wild, a freelance science journalist.

South Africa’s Survival Guide to Climate Change is not a book you read and put down to forget weeks later. It’s a workbook – one that will have you bookmarking pages, searching the internet for the given resources and motivating changes in your behavior. It’s educational, empowering and at times depressing. They’ve taken a difficult topic and shared it in a way that makes it easy to understand the intricacies of climate change, the policies and powers at play and your role in it all. It’s a book that should be taught at schools, so that future generations don’t make the same mistakes we have.

Throughout the book they explain what global warming is, why it matters and the plans made at a global level (involving dozens of countries), national level (South Africa as a whole) and local level (focusing on provinces, local government and individuals). They fill the book with definitions in the margins – making it easier to understand what terms like green bonds, inert waste and bunker fuel mean. They provide not just scary facts and figures but resources and actions you can start implementing to make a difference to climate change. One of the scariest figures in the book is 2. As in 2 degrees Celsius. This is how much South Africa has warmed since 1900. It is double the global average, and that 2 degrees is a number that scientist warn can be catastrophic.

There are two things that make this book stand out. The first is that it’s written for the South African reader. As the authors states in the book, whilst global warming affects us all, it affects us in different ways. It’s not enough for us to know what’s happening in the world, we need to know what’s happening on our doorstep. That is where it begins. We need to understand what our government is doing (or not doing), issues different areas in South Africa are facing and what we can do. They provide resources that are local – giving you a chance to put theory into practice.

The second is that they give you tips. Tips that range from easy. Ones that you can start doing immediately as well as others that take longer and involve more time and money. The authors final words in the book is that “to survive we need to act – even if the first step is small”. People may argue what effect individual action can have, but if ever you wanted to know, you only need to look at the humble plastic straw. The plastic straw has become the most vilified piece of single use plastic. It has spurred boycotts (#stopsucking and #ditchthestraw) and has become such a no-no that big brands like Starbucks, Ikea, Woolworths and Tsogo Sun have either removed or committed to removing plastic straws from their establishments. Straws are the 9th largest group of marine litter items collected worldwide between 1986 and 2011. Ninth. Before them are 8 other objects which are being dumped into our oceans at a much larger rate. In fact, the number of cigarettes (the top polluter) that made it into our oceans over the same time period is 8 times bigger than straws. The person who started the anti- straw movement? Milo Cress, a 9-year-old boy from Burlington, Vermont.

Small actions made by individuals can and do add up. With that in mind, I’m sharing some of the tips I learnt from this book to reduce my waste and make a small (but worthwhile) change to climate change.

In order to change your behaviour, you need to measure it so you can see where you’re at and where you need to go. The authors give details of various calculators online such as Food & Trees for Africa, which is the first South African carbon calculator, that allows you to work out what your footprint is.

Eating seasonally. Most farmer’s markets and independent grocers only stock produce that is in season. The bigger retailers often stock out of season produce that’s imported. Check labels to see where produce is from and choose local rather than imported. Produce in season also generally tastes a lot better. The authors do provide a list of produce by the season.

Focus on the Use By / Expiration Date. Those are the dates on foods that will tell you when food is either no longer palatable or safe to be eaten.

Store food correctly. Put new items in the back and older items in the front of your fridge and pantry so you can see them first and use them first. Store produce correctly so that it doesn’t go bad.

Shop with a list. Go into a shop buying what you need instead of guessing and coming home with items you already have or will not use. Even better shop with a loose meal plan in mind.

3. Use Electricity and Appliances wisely

If you can, grow your own vegetables and herbs. Admittedly this is something I’ve tried and failed, but one day. When choosing plants for your garden choose local/ indigenous plants. Alien plants i.e. Those that are not local require more effort and consume more water to stay alive.

Reduce not only the amount of plastic you use but also paper. The easiest way to do this is to start eliminating the single use stuff like plastic bottles, cutlery, Ziplocks and clingwrap and replacing them with alternatives. When it comes to paper, try getting receipts electronically and avoid printing out unnecessary documents.

This is by no means an exhaustive list, and just touches on the tips for survival the authors give. Each of the above is covered in so much more depth and they include conversations around electric cars, travel, ocean pollution and how to bother your local government and leaders. They also illustrate how different communities in South Africa are already suffering from climate changes and the policies and plans being put forth to make a change.  To find out more you’ll have to read the book for that.

South Africa’s Survival Guide to Climate Change is available from all good bookstores nationwide and online.

South Africa’s Survival Guide to Climate Change was sent to us by Pan Macmillan. Pan Macmillan nor the author approved or reviewed this piece prior to publication. Opinions are our own.