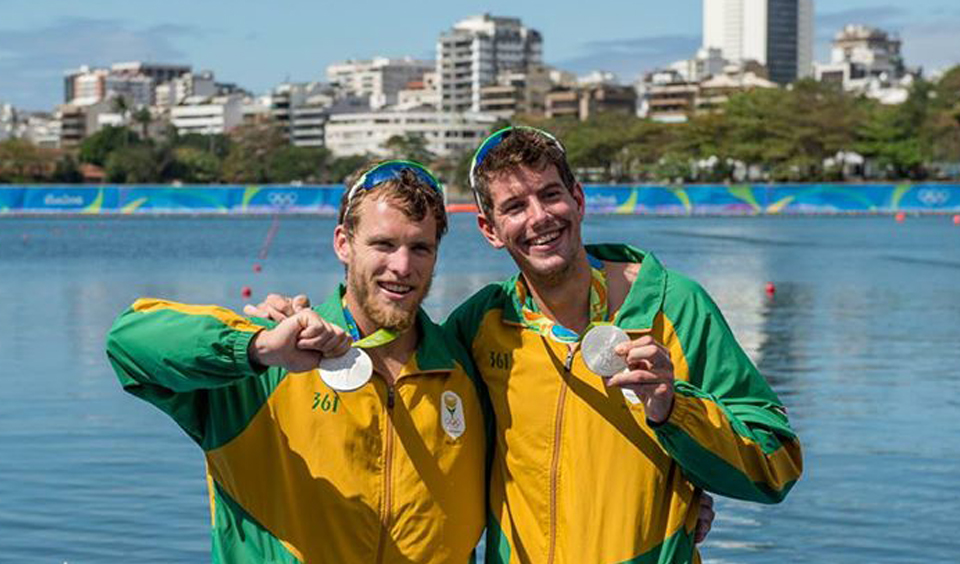 “Many of my rowers wouldn’t make the cut physiologically in many of the top teams in the world. They’d be 15-20 seconds behind in the ergo test [a measure of ergonomic work on an indoor rowing machine] but there’s more than one way to skin a cat”.

This quote is attributed to Roger Barrow, the South African Rowing Team Coach in this article

In the recent Olympic Games in Rio, the South African Rowing Team bagged 1 silver medal and all earned top 5 places. For a group of athletes who physiologically “don’t make the cut”, participating in a sport that is woefully underfunded (Team Britain has a budget 30 times the size of the South African budget) their results are incredible.

Especially when you consider that rowing has another element – teamwork. To achieve not only do you have to have the behind-the-scenes team working for you, you need to work as a team in one of the highest pressure events to get results.

We spoke to Olympic Rowers and medallists Shaun Keeling, Lawrence Brittain and James Thompson for insight into how an unlikely team has become the team to watch.

James Thompson placed fourth in the Men’s lightweight double sculls in Rio and won a gold medal in the 2012 Summer Olympics.

Team RowSA On the importance of Team

“There are many players involved starting with my partner in crime Lawrence, who I have been good friends with over the last seven years. The support from my family from the beginning of my rower career right through until the race, and my girlfriend over the past few years. My coach Roger Barrow who has coached me since 2006 and been a fundamental part of getting the rowing programme to where it is and getting five boats in the A-Final in Rio; and our team behind the scenes: doctor Danielle Lincoln who made big inroads to keeping me healthy which I have had a problem with over the years; our physio, Gareth Bruni, who held me together; and James Clarke our sports physiologist who works very hard alongside Roger on our programme and monitoring us. Also, my other doctor, Nicky Van der Walt, who has done two operations on me and many cortisone injections over the years and fitted me in at very short notice” – Shaun Keeling

“For myself the big ones are: Shaun, obviously, as he has to pull half the boat; Roger, as he is the chief and not only coached us to the silver but has created the entire system that works for us so well; my Mom (Dr Lincoln) or “team doctor” – she was amazing through my cancer and holds the entire team together through some massive weeks of training, which some of us would fall apart without; and Jimmy Cark our physiologist who works closely with Roger to develop our program and monitors us making sure we are on the limit but not going over it. Rowing is a team sport & our team is like a family. Everyone pitches in to make the train as fast as it can be ” – Lawrence Brittain

“We are incredibly lucky to have the support structure around us that makes up what Team RowSA is today. To have support staff who are both experts in their respective fields and who are as dedicated to winning gold as we the athletes are, is incredible.” James Thompson

On the importance of Communication

“[Communication] is quite important. Rowing is all about that teamwork and you have to act as one to be effective. I make most of the calls as I am in the back of the boat (or the front of the boat depending on which end you call the front or the back) so Shaun can hear me clearly over the noise of the race but as we have raced so much together we have a very stable race plan and I only adjust it slightly for each race as it unfolds.” – Lawrence Britain

“It is essential to know what your partner wants to do during the race. Every race we have a race plan that we discuss with our coach Roger the night before so that we have an idea of what we want in the race. But anything can happen on the line and a plan only works until the first stroke is taken. It is then Lawri’s job to call during the race, so he looks out and calls to me about what is going on and I respond accordingly.” – Shaun Keeling

“I think as a rowing partnership develops, verbal communication actually decreases. Following successful performances there is a deeper understanding and trust between crew members. In the double with John we can have races where five or six words are spoken but we are completely in tune with each other and executing our race plan.” – James Thompson

On Sacrifices to achieve your dreams

“Rowing is a four year cycle, so after competing in Beijing and not going to London, I put on hold any working career I could, so it was eight years down the line just before Rio. While everyone I grew up with was buying a house and a new car, I was living in a one-bedroom commune in a sport house using my savings to make it by. While this was tough, the Olympic medal does definitely make it all worth it” – Shaun Keeling

“I don’t see it as a sacrifice. I want to row and I want to be an Olympian so I find it quite easy to get up and go every day. I think of it as a job and I love my job.” – Lawrence Brittain

“I like to think of the preparation for Rio as having been a big opportunity, not a sacrifice. However, there of course has been a large amount of time spent away from home and family, which for me has been the biggest sacrifice.” – James Thompson

On that final 500m push to silver

Shaun Keeling and Lawrence Brittain moved from 4th place to 2nd place in the final 500m of their race.

“We have done many, many kilometres in training which enabled us to be able to push through like we did. At the 1k mark I made a decision that I needed to put it all out there regardless of what position we came just in order to be happy with the race and have no regrets. Three strokes after I thought that, Lawrence made a similar call, and from there we starting working our way back into the race for the medals. Racing is all about crews momentums and we gained momentum and took it from the British and Italians. Putting ourselves back in the mix and then putting the hammer down through the last 500m to the line. We came fourth at Lucerne in a World Cup earlier this year by .2 of a second and throughout our training to the Games and in the race Lawrence has been calling “.2 NEVER AGAIN”. We were not going to lose a medal in the dying stages of the race because of Lucerne and we still had some gas in the tank to make the Silver medal a reality.” – Shaun Keeling

“At the second world cup in Switzerland we had finished 4th, 0.2 seconds of 2nd and 3rd, in an incredibly close race. Through the final preparations we would remind one another about the 0.2 and how we would never let it be that close again. So at 500m to go I called to Shaun “point two, never again”. – Lawrence Brittain

On disappointments and learning from them

James Thompson and John Smith finished in fourth place, just under 2 minutes behind 3rd place in the Lightweight double sculls.

“We have trained and race our entire careers aiming at gold and we made our race tactics calls on the day to achieve that. We committed fully to putting out a performance that would achieve that goal, and put a great 1750m together before a small mistake; mistakes are made while under pressure and we will have to own that mistake. The lesson learnt is sometimes even when you have all the right parts of the puzzle, you can have a bad day. Sport is ruthless, that is what makes it fantastic to watch.” -James Thompson and John Smith