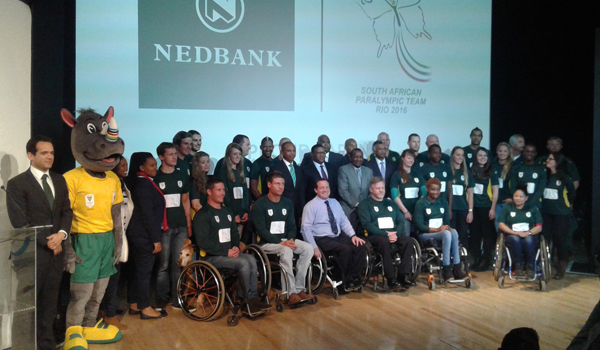 The word “Paralympic” derives from the word “Olympic” and the Greek preposition “para”, which means beside or alongside. This verbally illustrates that the Paralympics are the parallel Games to the Olympic Games and that they exist side-by-side.

Its origin dates back to July 29, 1948 – the day of the opening ceremony of the London Olympic Games of 1948. Dr Ludwig Guttman who had opened a spinal injury rehabilitation centre at the Stoke Mandeville Hospital in Great Britain, organised the first competition for wheelchair athletes. He called it the Stoke Mandeville Games, and 16 injured service men and women took part.

In 1960, the Stoke Mandeville Games would be renamed the Paralympic games and coincide with the Rome Olympic Games. 400 athletes from 23 countries took part in the first official Paralympic games.

This morning SASCOC announced the 45 athletes set to take part in the Paralympic games 2016. The team will represent 10 different disciplines, which is an increase from the 7 represented in London 2012 and 4 in 1964.

SASCOC also announced that they will be offering the same incentives to the Paralympians as they’ve offered to the Olympians.

Sources: Paraylmpic.org: The history of the movement; SASCOC: Team SA announced for the 2016 Rio Paralympics; Wikipedia: South Africa at the Paralympic Games

5 Tips for Your First Race