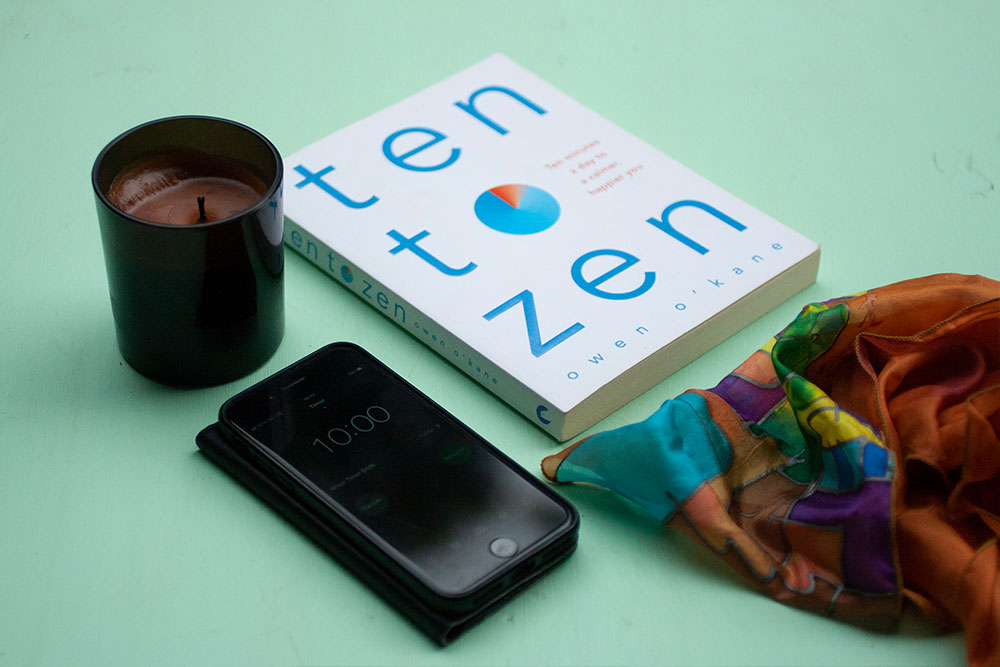 When it comes to self-help books, I prefer the ones that veer towards the educational side. Those which are so subtly self-help you wouldn’t think to go looking for them in the self-help aisle. What I strongly dislike is a preachy self-help book. Those in which you can almost hear the author yelling out to you “Are you ready to change your life? Reading this book is the first step to a new you! Are you ready to make that commitment?”

Ten to Zen, by Owen O’kane mixes the above two approaches. It started off a little too chipper, a little too gung-ho for me. At some point in the beginning chapters, I was congratulated for picking up the book and deciding to change my life. It was also at that point I decided to shut the book and come back later.

After giving it some thought, I decided to approach Ten to Zen like Kristen and Jolenta of the By the Book Podcast. Be open minded to reading the book and then live by the book for 2 weeks. All while keeping notes and reporting back as to whether the book had indeed changed my life.

Owen O’kane is a senior Psychotherapist who spent part of his early career as a palliative care nurse. It was his time spent with the dying that heavily influenced him and inspired him to give people the tools to help quell daily anxieties and stress. To bring more moments of joy and happiness into everyday life.

The book is divided into two parts, the first the introduction, description and personal examples of people who’ve used the Ten to Zen method to change their lives. The second is the Ten to Zen workout.

As I got into the Ten to Zen workout it was clear that the word “workout” was not added for effect. It is a workout, it involves visualizations, breathing, mindfulness and some meditation. As opposed to mediation which requires you being in the moment thinking about nothing, the Ten to Zen workout is a mental exercise that breaks up each minute into something you need to be focusing on.

The Ten to Zen Workout

O’kane sets out the Ten to Zen workout as follows

Minute 1 – Stopping and committing to giving yourself ten minutes with no distractions. Checking in with yourself and accepting your current state of emotions.

Minute 2 and 3 – arriving at your zen place. A place you create in your mind that represents zen to you

Minutes 6 and 7 – Managing your thoughts and negative thought patterns

Minutes 10 – choosing to live with acceptance, compassion and authenticity

There are guidelines for each minute as to how to do them, and O’kane suggests starting with the first steps and gradually adding more as you can handle them. He prefers to start the day with a Ten to Zen workout, but says it can be done at any time, as long as you do it daily. For two weeks that is what I did.

The first day I did at night before bed. It took 14 minutes, as I stopped to re-read each section before doing the step. It was a struggle and it didn’t flow as a 10-minute workout because of all the figuring out what to do next. I did feel super zen after, but it could’ve also been tiredness. Slept like a dream.

The next day I tried the workout first thing in the morning. It flowed better as I had a better understating of each step, but I still struggled with parts of it.

One day I did the workout in the middle of the day during a bout of load shedding. Which, it turns out, is a great exercise to do when dealing with the perils of loads that shed. They may take my electricity, but Eskom cannot take my Zen. I had plenty to think about during the negative thoughts section.

Over the next two weeks I alternated between doing it in the morning and at night. In general, I preferred the morning and would suggest you do not do it while already lying down ready for bed. I may have fallen asleep one night during one of the close your eyes and think bits.

Despite it’s shaky start, there is good advice in the book and parts of the workout are helpful and make sense.

I liked the way he chose adaptive thinking over positive thinking. This is a term he feels leads to more constructive change than positive thinking. Which during life’s worst and explainable moments, is not a realistic mind frame to be in. As he says “Hope is found in learning the flexibility to adapt and live fully with what is, rather than entering into magical thinking about what could have been”.

His final minutes on being compassionate to yourself and others, accepting what you cannot change and living true to yourself was also good. This is also a great way to go through life.  I understand the importance of looking after your mind like you do our body. Mindset really does have the ability to change the quality of your life.

Hope is found in learning the flexibility to adapt and live fully with what is, rather than entering into magical thinking about what could have been

Most of the time I did the workout in the morning, shortly after my regular exercise session. High on endorphins and feeling just fine. Fine until I hit minute six, and had to recap, yet again, all the negative thoughts that habitually pop into my mind. Before I knew it, I was wound up with every negative thought swirling through my mind which I now had to watch and accept in minute seven. Towards the end of my two weeks, I started hopping through this step with a “yes sometimes negative thoughts crop up, I am not thinking anything negative right now, so thank you, next”.

What I found more helpful was after identifying those thought traps and thinking about their validity; being able to identify them in moments when I felt myself falling back into them. This was usually not during the workout but sometime during the day. Acknowledging them as they naturally happened and letting them wash over me was more helpful than actively thinking about them in the session.

The other thing I would have preferred, was having a summary of each step on one page. He lists them like I did above, but the directions are in the chapters, which means that often I forgot what to do and had to skim through the book to find the instructions.

But did it change my life?

Halfway through the experiment, I was told I seemed more zen. I didn’t know whether I should be delighted or insulted. It has however, helped put things into perspective and now rather than do the workout as set out, I prefer taking little bits and inserting them into my day as need be.

As to whether I’d recommend the book.

If you really like self-help books and find them enlightening, you’ll most likely enjoy this. Or, if you find yourself in a negative head space more often than not, it could help change your perspective and help you feel calmer and happier. If the above doesn’t ring true for you, give it a skip.

Ten to Zen was gifted to us by Pan Macmillan. Pan Macmillan nor the author approved or reviewed this piece prior to publication. Opinions are our own.