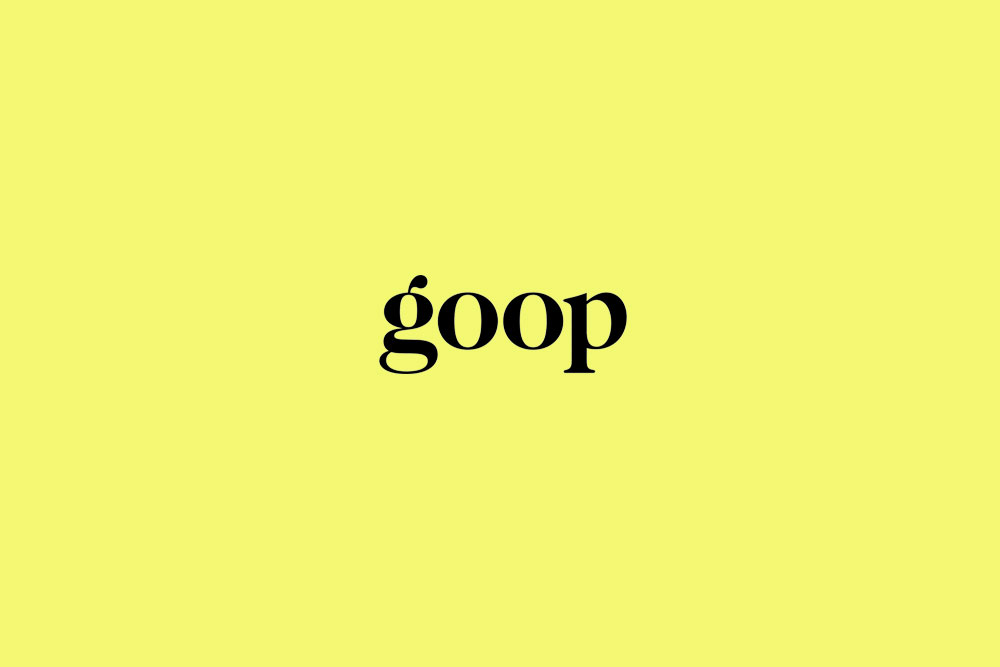 ICYMI Gwyneth Paltrow, founder of aspirational wellness brand GOOP, debuted a 6-part Netflix series titled “The GOOP Lab”. In a trailer for The Goop Lab, Gwyneth with a glint in her eye proclaimed, “we get one life, so why not milk the shit out of it”. This is Goop so one must expect the milking to be woo-woo and expensive. Before it had even premiered it had caused an uproar. I found that people generally fall in 3 camps. The first group, furious that she had been given another platform to spread her “pseudo-science” and promote her Goop brand of what they’d no doubt term ‘wellness quacks’. The second group, intrigued to watch and explore the secrets to the Goop Life. And, the third group, to whom Goop means nothing more than something sticky.

I found myself in the second group, wanting to see what they’d cover. When it premiered, I sat Feige down and announced we were about to get Gooped. Feige made it through one episode, the first one on psychedelics, during which she commented that she would prefer the mushrooms on a pizza and not presented dehydrated in a tea. She also noted that the production value is brilliant, which it is, the content interesting, informative and put together really well, but that it’s too much to watch more than one episode at a time. I binged through the series in two days. My Goopmeter is clearly higher than hers.

Each of the 6 episodes runs between 30 and 35 minutes long. While they each cover a different topic, they all follow the same structure. It begins with Gwyneth and Goop’s Chief Content Officer, Elise sitting on a millennial pink couch, visibly glowing, talking to one or two experts in the field they’re about to explore. That conversation continues throughout the episode with the inclusion of interviews with people who have tried said method and found it life changing. There is also a group of Goop employees selected to try out said experience who are shown trying it out and describing the effects.

In a nutshell the 6 episodes deal with the following topics:

1. The use of psychedelics namely mushrooms to bring up past trauma, painful memories and emotions to enable you to deal with them.

2. Cold immersion therapy aka the Whim Hoff Method whereby you learn breathing techniques and ultimately immerse yourself in freezing cold water. This, according to Whim Hof, of who the method is named after, helps deal with stress, panic attacks and anxiety.

3. Lessons in intimacy and self-love taught by sex educators Betty Dodson and Carlin Ross. Methods involve naked intimacy lessons where you learn to be vulnerable and comfortable in your own body and one on one lessons with Betty as she teaches you to orgasm. This is a female only class.

4. How to age better. This looked at using various diets (vegan, pescatarian and an awful diet that consists of what can only be described as astronaut food) to change your biological age. They also delved into non-invasive beauty treatments to do to keep you looking younger.

6. Mediums and intuition – mediums as in the type who call on the dead (think John Edwards) and do readings to send you messages. It also looked at how you can use your intuition to receive energy and read people.

On a scale of 1 to Goop I’m about a 6.5. I have a natural curiosity and believe there is a space for both western and eastern medicine and practices to work alongside each other. I like to look at these wellness trends, experiences, (whatever you want to call them) with an open mind and a healthy dose of scepticism. I’m all in for trying new things, but I like to understand where they’re coming from – and why. And to be honest, I like Goop. Amongst the exorbitantly priced gift guides, psychics, wacky wellness rituals and this candle (which became funnier when Gwyneth admitted not actually knowing where her vagina was located in episode three), they put out a lot of good content.

And that is what The Goop Lab is. There’s plenty crazy, Goopy and head scratching. But, it also gives you an interesting and informative look at some out-there practices. It’s well produced and the content is good. What she did with episode 3, is something you never see when it comes to female sexual health, intimacy and true self-love. It was a completely open discussion about the female body, why most don’t know what is what, and why there’s so much shame about our bodies and sexuality.

The things that made me scratch my head and wince were the psychedelics, energy medium, intuit and the facial treatment that involved threading a thread into one’s face and pulling up the skin. OUCH! I found myself hooked on each episode, but out of the 6 episodes there were only 2 things I’d actually be open to trying for myself.

What I would try from The Goop Lab

1. The Whim Hoff Method – cold water therapy isn’t new. Plunging yourself into ice cold water is an old Nordic tradition done because of its perceived health benefits. Cold showers have been all the rage for years now. In addition, breathing techniques are often used to calm oneself down, and learning them could be useful when it comes to stressful moments. While Whim Hoff is eccentric, and I can’t see myself being ok with bikini workout in the snow. But plunging myself into cold water I’m quite keen on. I’ve swum 3km in freezing conditions, I’m ready.

2.  Facial acupuncture – I’ve tried acupuncture before. Can’t say it made a difference, but I also didn’t do it for the prescribed time. It was very relaxing and Elise, the employee who tried it out looked positively radiant when she walked out.

The Woo-iest of the Woo-woo

The energy medium was just crazy to me and it was an uncomfortable episode to watch. I did not care for the medium that was reading the dead or people or energy. I firmly believe in the concept of rest in peace and found it unconvincing and ridiculous. But that episode provided some of the funniest moments and proof that not all Goop employees believe everything touted by GP. A food editor, who was not a believer of mediums did all the exercises to help improve intuition and reading people. The look on her face during it, was one that read “how did I find myself here”. At one point she exclaimed “I cannot empathise with any of you, I feel nothing”. To try change her mind, the medium did a reading. I’ve included a rough excerpt of that reading for your reading pleasure:

M: A Gemini, a June birthday

M: Ok ill tell them to come back to me later with that in another form

Is there an aunt there, a great aunt that’s crossed over?

G: On my mom’s side on the family?

G: My grandmother didn’t have a sister

M: Your reading’s interesting because I feel like people are swirling in that aren’t very connected to you.

G: (Laughs) that I don’t even know

If you’ll believe it, it turns out she was reading one of the producers. But that food editor sure as heck didn’t believe it.

The mushroom episode reminded me of Rebecca Davis’s book self-helpless which is a satirical look at various ways of self-help including the use of psychedelics. If you’re on the fence on The Goop Lab but want to know what these things are like from a person not immersed in wellness culture, read that book.

My Thoughts on The Goop Lab

Despite the goopiness, the many shots of people sitting around barefoot on cushions in some tropical settings, and the many tears shed, it makes for entertaining TV.  It’s interesting and it gives you a visual peak into some crazy wellness experiences. Not all of which to have to be believed, for one to find them interesting.

The show starts with a very important disclaimer: “The following series is designed to entertain and inform not provide medical advice. You should always consult your doctor when it comes to your personal health, or before you start any treatment”. It’s a disclaimer used very often when someone shares something that could be construed as medical advice. When you see said disclaimer, it’s a gentle reminder to take what you watch or read with a heavy pinch of salt. Preferably pink, mined from the Himalayas and blessed by a Shaman.

Should you find yourself interested in exploring something seen on TV, I’d recommend doing your research and doing it in a safe way. The psychedelics were done in a controlled environment with people who were there to support and manage it. Likewise, with the ice plunging. People find joy in different things. If that’s an ice-cold shower or lying on a bed while a medium waves his hands over you, good for you. Not me.

The thing that makes Gwyneth Paltrow and Goop, so enticing is that at 46 she is aging better than most and in a way that looks more natural, less filler reliant. Goop employees seem to be radiating a glow I assume comes from the kale smoothies or celery juice they ingest upon waking. I’ve since learnt that there’s an actual starter kit that promises you the Goop Glow that involves no greens. Rather it’s creams and masks and some super powder you drink. It’ll set you back $48 which in Goop prices is a literal bargain.

I discovered that GP actually stands for Guinea Pig, because Gwyneth will try anything. She has a permanent sparkle in her eye, doesn’t seem to take herself seriously and is fully aware of the jokes and mockery aimed at her. As I watched the show, I started noticing her facial expressions more – the glint in her eyes, the smile and nod she gave whenever an expert said something a little too out there. It was like she doesn’t quite believe it, doesn’t buy what they’re selling. Every now and then I’d get the feeling from her or a Gooper that they were in on some joke. Maybe that joke is making us believe that wellness requires wealth and privilege when as Gwyneth herself says in the anti-aging episode, The tenants of wellness are typical free: Don’t smoke, exercise, sleep well and pray you have good genes in your favour.

Have you watched it?

Ask The Expert: Are Yoni Eggs Bad for you?

How a Weighted Blanket can Help Anxiety, Sleeplessness and ADHD