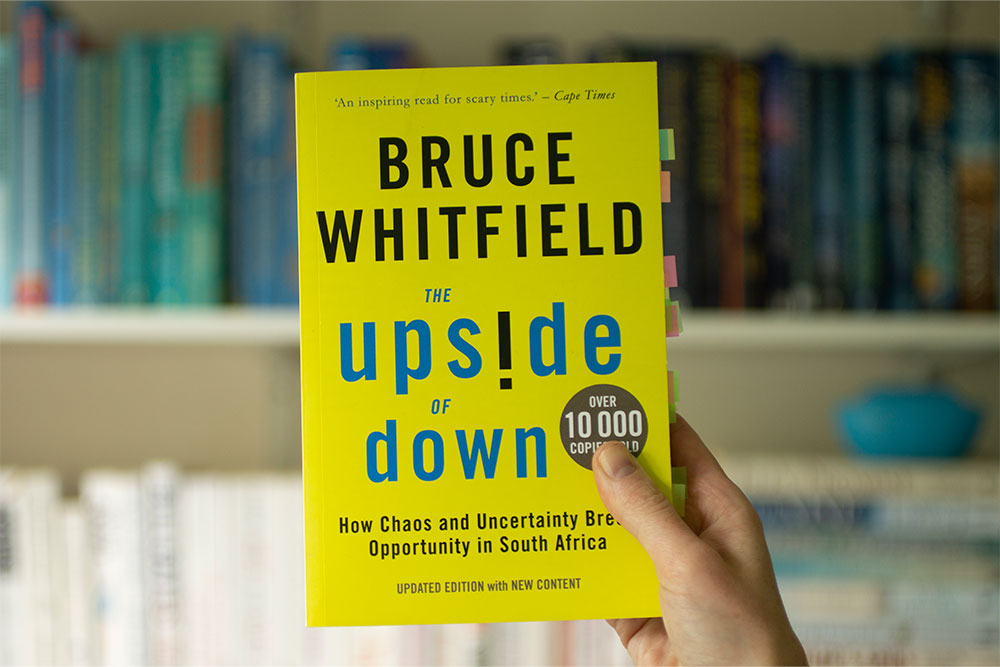 In the Upside of Down, Bruce Whitfield sets out to challenge the belief that our time is the most challenging in human history. Not only that, but he goes on to show how the chaos and uncertainty that have become hallmarks of today’s world can bread opportunity, especially in South Africa. All of this is backed up by his learnings in two decades of interrogating South African billionaires and start-ups.

As soon as I started reading the preface, my mind immediately went to Factfulness by Hans Rosling. Despite their unique tone of voice, both books set out to challenge our thinking and perception. Be it about the world, or in the case of The Upside of Down, South Africa. Then I started Chapter 1 and it became clear that Hans Rosling was one of the inspirations behind this book.

In a similar style to Factfulness, Bruce sets out 16 multiple choice questions about South Africa that span poverty, economy, crime and quality of life. If you’ve read Factfulness, you’ve learned how to think in a way that will result in the correct answer. But it’s not just about guessing correctly, it’s about the realisation that perception is not reality and despite the obvious problems that plague South Africa, incredible progress has been made.

For all its deep flaws, it’s really in a better way than most of us think and certainly better than it was at any point in the apartheid era, despite may right wing protestations to the contrary.

In the Upside of Down, Bruce Whitfield makes you feel good about South Africa and the potential the country holds. But, importantly, he does it without negating the negatives or the huge strides that are still needed to improve so many areas of life in South Africa.

This is why you should read The Upside of Down

1. To get a positive yet realistic view on South Africa.

2. Chapter One’s multiple-choice questionnaire about South Africa and the pages that follow explaining the answers. I learned so much about how things were versus how they are now.

3. Chapter Nine’s story of Frank Magwegwe, which is nothing short of incredible. If you’re ever down in the dumps and need motivation to push on or reinvent yourself, his story will inspire you.

4. Chapter Ten’s explanations on the value of the rand. I particularly enjoyed his story about Sasfin’s digital currency billboard along the M1 in Johannesburg. IYKYN.

5. Chapter Twelve’s shared observation by Economist Rudi Dornbusch “A crisis takes a much longer time coming than you think, and then it happens much faster than you would have thought”

6. A really great quote at the beginning of each chapter. Having just read The Little Wartime Library, which too opens each chapter with a quote, it really brought home how challenging it can be to this and get it right. Bruce gets it right, here is just one to give you a taste: “Time is a great teacher. Unfortunately it kills all its pupils.” – Hector Belioz

In closing the book, Whitfield writes “South Africans suffer from considerable bouts of recency bias. Consumer and business confidence are indeed at multi-year lows, but there is no way south Africa is anywhere close to the levels of anxiety that prevailed in the run-up to the 1994 elections when Chris Hani was killed and it seemed uncertain whether the political transition could happen in relative peace. We picked ourself up from that mess. Surely we can do it again.”

Can we? While his book may not provide all the answers it provides much food for thought and a view that’s considerably more positive than any of the fearmongering views found on social media.

The Upside of Down is published by Pan Macmillan and is available here.