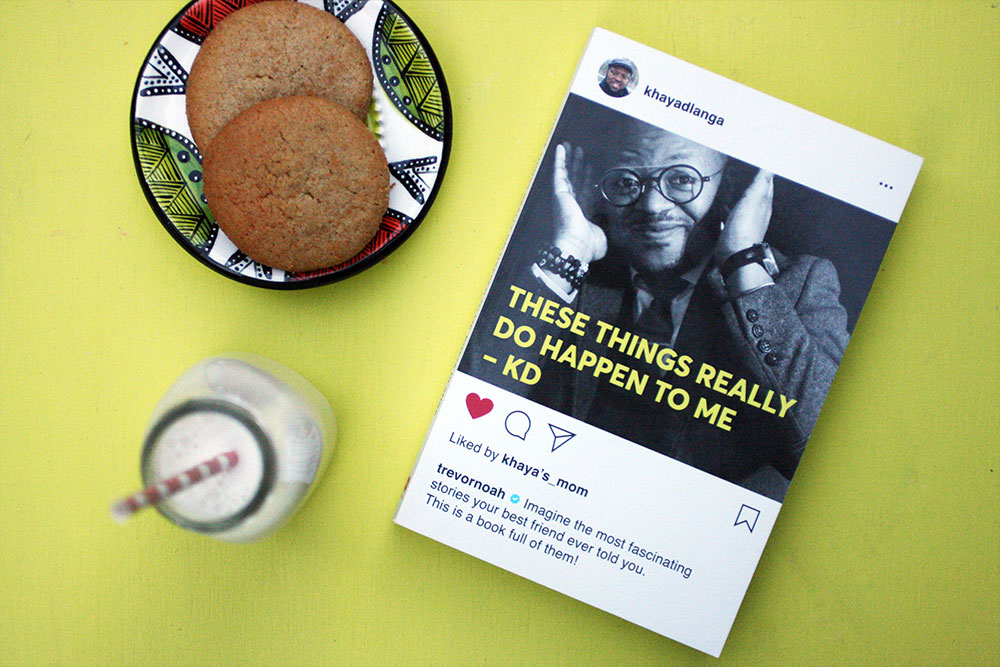 In the introduction of “These Things Really Do Happen to Me”, Khaya Dlanga says that he doesn’t necessarily have better or more stories than others, he just talks about them and shares them. That may be, but not everyone with a story is a storyteller, who has the ability to share those stories well. A story with a beginning, a middle and an end – bringing in humor, lessons and the occasional food for thought.

Khaya Dlanga is a storyteller and his ability to transform what may have been a fleeting moment into an entertaining story, pulling the reader into his reality is what makes “These things really do happen to me” such a great read.

The book is a collection of stories about Khaya’s life – each story being a chapter, and each chapter being just a few pages long. It’s put together chronologically which makes it easy to follow and, in a sense, get to know him from child, to teen, to young adult, to where he is today.

He is funny, thoughtful and blunt. He says things as he sees them, not one to tiptoe around the conversations we’re somehow conditioned to avoid – like race, religion and politics. It is his frankness that gives the reader a chance to step into his shoes and see the world through his eyes.  It’s a book I filled with bookmarks to mark quotes and chapters, and one that left me thinking for days afterwards about race, culture and how quick we are to judge people without knowing their circumstances.

As a white Jewish woman, my background can’t be more different to Khaya’s, a black Xhosa man, but despite the differences there was plenty I related to. What I didn’t relate to, allowed me to learn and become more aware of where I could become more understanding and embrace the culture of the country I call home (see answer number 4) while still maintaining my own heritage. One of the biggest lessons I took out of reading the book was that no matter your race, religion or language, we are all human and have so much in common. At the same time our race, religion and language also make us different, and those differences are important and should be celebrated and not minimised. We should aim to embrace the uniqueness of each culture instead of expecting everyone to conform to one global standard.

In his book, Khaya speaks about race as something that should be spoken about, and the importance of allowing the past to be spoken of, to be acknowledged and for us to look at how it affects where we are and how we treat people. I thought about that a lot, and how unfair it is to expect people to ‘get over it’ when so many cultures are based on the past, on customs and laws we bring down through the generations. The past actually does matter; and although you can change your future and achieve despite your circumstances – our pasts, our history and our upbringings have an undeniable imprint on who we are, what we go after and where we end up.

These things really do happen to me, is a book about more than entertaining stories – it’s about culture, heritage, family, humanity, race, empathy, learning and taking the cards you’re dealt with and playing them to your best advantage. It’s a book filled with lessons, whether it be Khaya’s mothers “practical feminism”, being kind, happiness, or being willing to stand up for others.

If you’re looking for a thought provoking read that is also entertaining and at times humorous, Khaya Dlanga’s new book is for you. Below Khaya answered some questions about the book, plus we’re giving away 3 copies.

One thing that stands out from your book is what an incredible woman your mother is and the influence she’s had on your life. What is the most powerful lesson she’s taught you?

To be resourceful. She never feels or behaves as if there is some insurmountable challenge. She will always try to out think the problem facing her, even if she comes out bruised at the end of it all.

In your chapter “talking about race is not controversial”, you mentioned how South Africans, in particular black South Africans have adapted to Western culture – and how there’s more of a willingness and effort from them to adopt and learn Western culture than white people embracing African culture. What is the best way for white people to embrace African culture in a way that does not come across as appropriation or offensive?

I think it’s about trying to understand what it means to be African and not to be permanent or psychological tourists. It is about embracing what is truly African and not look down on parts of it. Be African without judgment, without thinking what Western is better. It starts with simple things like trying to learn the languages of  people who are around you. Going where they go and not try fit in by trying to. One will fit in by being empathetic.

What do you think is the biggest stumbling block facing South Africa today – preventing true equality and freedom?

There are many factors. One of them being education. The other, assuming that poor people are poor because they are lazy without the same people recognizing their own privilege. It is also because people think that by giving others an opportunity, they would be taking away from themselves. You take nothing away from yourself when you accept your privilege. That is a start.

You credit Donovan Goliath with the cover idea / design – which is brilliant – who’s idea was it to put the liked by Khaya’s mom? And is that more than it appeared to me at first glance (a joke about only your mom liking the book), or is it something more – a tribute and thank you to your mother?

The design by Donovan is pure genius. I still can’t get over the great work he did here. Khaya’s Mom liking it was my idea, I just thought it would be funny, but also because she is proud of the fact that her son has another book out. She kept telling me stories throughout the writing process, many of the stories she told me did not make it though.

What advice would you give young black south Africans who look up at you and what you’ve achieved as something to aspire to?

I would just say stay true to who you are and don’t let anyone belittle your story, nor make you feel ashamed of where you come from. Where we come from and who we are is the one thing that sets us apart from someone else.

To win answer the following question in the comments below

What is the language most spoken in your home?

By entering this competition, you accept our t’s&c’s. Competition ends Thursday 18 October, 2018. Only valid for South African residents.

All the things we Loved this month [September 2018]