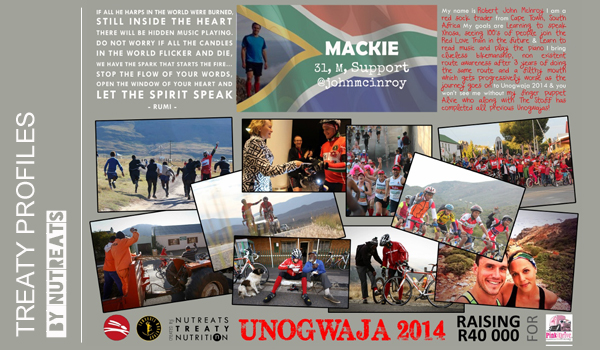 This amazing group of people are the support crew and 12 cyclists/runners who will be cycling from Cape Town to Pietermaritzburg in 10 days and then running Comrades on day 11! Not only are they able to put their bodies through such an epic test of endurance but they are also aiming to raise R1 million for Amabeadibeadi charities while doing it.

These people have serious heart, inspire everyone around them and never settle for being ordinary. They inspire us and because we know that they will inspire you we’re busy telling their stories…

If you’ve heard about Unogwaja and are spell bounded by the story, it is most likely you heard about/met John McInroy first.

John McInroy, the ‘crazy’ dreamer, who brought the story of Phil Masterson-Smith back to life in an epic 10 day challenge, that had an association as strict and elitist as the CMA embrace them as one of their own. John has a knack for sharing the story in such a way that mesmerises anyone who listen and gets them wanting to be involved. Trickery? Mass mind control?


“No tricks, just passion.” Say John McInroy, “You can’t turn it on. It’s either there or it’s not! It’s the story itself that is special. When you get your head around the full detail of it all and the serendipity that binds it all together it is truly mind blowing. It’s like a fairy tale. We all want to be part of fairy tales don’t we?!”


From the outside the life of McInroy may seem exactly that, but his journey has been anything but a fairy tale. It takes dedication, drive, perseverance and sacrifice to create what he has in the past four years and John has thrown his all into it.


“Unogwaja has given me more joy and gratitude than I could ever dream of, but it has also taken it out of me hugely and I was close to total burn out several times and especially mid-way through last year after Unogwaja 2013.”  Despite his struggle, he still continued to share his infectious spirit and work toward Unogwaja 2014.

Sometimes when creating a vision that is so intertwined with giving back and focusing on the thousands upon thousands out there that need help, one neglects themselves and their needs and this was the case for John McInroy. “I really struggled a lot in particular from an emotional perspective but I have learnt a lot through this and discovered that I needed to go this far to start to learn to respect myself and know what is really important. Like love!” All you need is love, right Paul, John, Ringo & George?


Love is a theme that has always fuelled Johns missions and this year his love of love is being flushed to the forefront with the first ever Comrades Red Love train. The Red Love train which naturally just came to be – like most of which surrounds John McInroy – during Comrades 2013.

“The Red love train really created itself! It just happened! In 2013 experiencing the atmosphere and camaraderie of being part of a team and something bigger than ourselves during Comrades was unforgettable. We wanted to be able to share this with more people and create a bigger force on the road as well as from a fundraising perspective.”


Despite the exclusivity that Unogwaja holds (Accepting only 12 cyclists yearly), the Red Love Train has no limit. John’s vision? “One day we could be 100s or even 1000s, imagine the impact we could have?!”
The impact and outlook that John has is unique and it’s something that has made Unowaja what it is today and will be in the future. The Red Love Train is an extension of his beliefs and a symbol of what is important to him.

“For me the Love Train is an expression of why I run! It doesn’t matter how fast, where you come or even if you finish at all, the important thing is to enjoy the journey and do your best and help each other as much as possible. When we do this, we often surprise ourselves with the outcome even if or because it wasn’t a focus! I believe we miss out on so much being over focussed on the end result!”


However, when your goals match McInroy’s you have to visualise an end result – there has to be a place you want to take your visions to John McInroy, not wandering around aimlessly just distributing red socks and love has vision and direction.“I really hope this year’s Red Love Train will lead to more people wanting to be part of it and create a truly unique way to experience Comrades as part of a team and something bigger than yourself.”

Unogwaja has grown bigger than himself, so much so that this year, after three years on the cycling team, he made the decision to sit out and switch to a support roll instead.


“We only choose 12 people to ride and had truly special applicants from all over so me not riding meant one more place open for someone else to experience this journey. Knowing Tiago and David would be part of the team for a second year in a row made the decision a no brainer and with a bit of luck I can have a better impact on the bigger picture in my new role off the bike.”


Despite the switch being ‘the right’ time, it won’t necessarily come easy to John McInroy. “Some say I will enjoy the “relaxed drive” up this time round compared with the bike ride, but I actually think it will be the opposite, as it will ask all sorts of other questions and demands of me. The cycle represented “freedom” and “solitude” for me which I will miss! As well as the inevitable banter & fun with your teammates that hours and hours and hours of time on the bike brings out!”


This is not to say he won’t be giving his full heart to his new role. “If I can contribute half as much as I have been contributed to & supported over the last three years I will be happy. The support crew over the past three years have been exceptional people. It will be an honour to witness the journey from a different perspective and serve the team in any way I can. There is something special in that.”


The specialness of the support crew form part of the most memorable moments of Unogwaja for John McInroy. “There are so many. I could go on and on. For hours! There is so much to being part of it, so much I am truly grateful for and feel blessed and privileged to have experienced.”


But even so, some moments stand out more than others. “The stories of how people like Cory and Cindy, David, Tiago, Nato, almost everyone who is part of Unogwaja are very special to me. They are all incredible in their own right and are small reminders that ‘it is written’.”

And it’s not just the stories that have stood out. “Meeting and sharing moments with Biddy Masterton-Smith (Phil’s 90 year old half-sister) are always very special to me. My ‘breakfast’ on the side of the road in Tarkastad with Simejola as well as meeting Sibusiso on his bike outside Mount Fletcher as he pedalled to school in his own pair of red socks will stay with me, along with the incredible story of how Elre Fredericks came to be part of Unogwaja and now she is even more a part of it joining this year’s Love Train!”


Still there is one moment from last year’s Unogwaja that seems to trump them all.

“If I had to isolate one thing that I experienced on Unogwaja that stands out for me, it happened last year when I found myself riding alone for a little bit outside Lady Frere and a young boy ran to the side of the road from his informal settlement shouting “Unogwaja” – I can’t explain how it made me feel. It was like this boy was telling me to keep going, that hope was spreading and it was reaching people all over our country.”


Unogwaja is reaching people all over the country and really all over the world. Testament to this – the ‘token’ American woman that Unogwaja attracts every year – to drop everything in their lives and come to South Africa to assist with team Unogwaja’s laundry!?

“hahahahaahahahahahaahah!!! I must say if every American is like Cindy and Cory, good grief they must have one hell of a country! The way they both came to be part of Unogwaja is magical and I guess a little bit crazy?! But to know there are people out there like Cindy and Cory who are willing to jump so courageously and so selflessly is so inspiring and special. Both these ladies have supported me from afar more than they will even know. I am very grateful! I am definitely going to USA in the near future, if there is a country full of Cindy’s and Cory’s we are going to spread shoOops! Like wildfire! And I owe Barack a visit anyway!!! Did you see Cindy’s tattoo?! That made my day today! Couldn’t believe my eyes! Cindy you truly are one in a million!!!”

Unogwaja is so full of its surprises, like Cindy and Cory that they almost don’t even surprise John any more. “Every day we are met with something out of the ordinary. It has become a beautiful reminder of the good of humanity. I mean take the way all the people/sponsors/local communities/schools/hostels/B&Bs just jump in and support. No questions asked or answers needed, they are just in.  Unconditionally! To feel this warmth and this common passion has been incredible. We are continually grateful for this support we are given, without which this journey and the fundraising would not be able to happen.”


In order for the Unogwaja to leave a legacy the journey and the fundraising have to happen. “Unogwaja is a journey that inspires our nation to live their dreams and follow their hearts and believe that they too can do it.” This legacy is something they hope to impart on every place they pass through along the way.


“I think gradually the message is getting to more and more people. It takes time but I believe when the message gets there it can be powerful in the course of their lives. Masterton-Smith was faced with a crazy amount of hurdles and reasons why he couldn’t cycle to Maritzburg from Cape Town in 1933 and yet he did it.


Many of our countrymen and women are faced with what seems to be insurmountable obstacles which prevent us from even trying. The message from Unogwaja says, ‘Try, I dare ya, take the first step, you never know what might happen next!’ Look at the life of Masterton-Smith, his legacy lives on over 70 years after he passed away and through the Unogwaja is a reminder to us all that we must not give up on our dreams no matter how unlikely they may seem.”

Shana Power; Being a woman in a man’s world