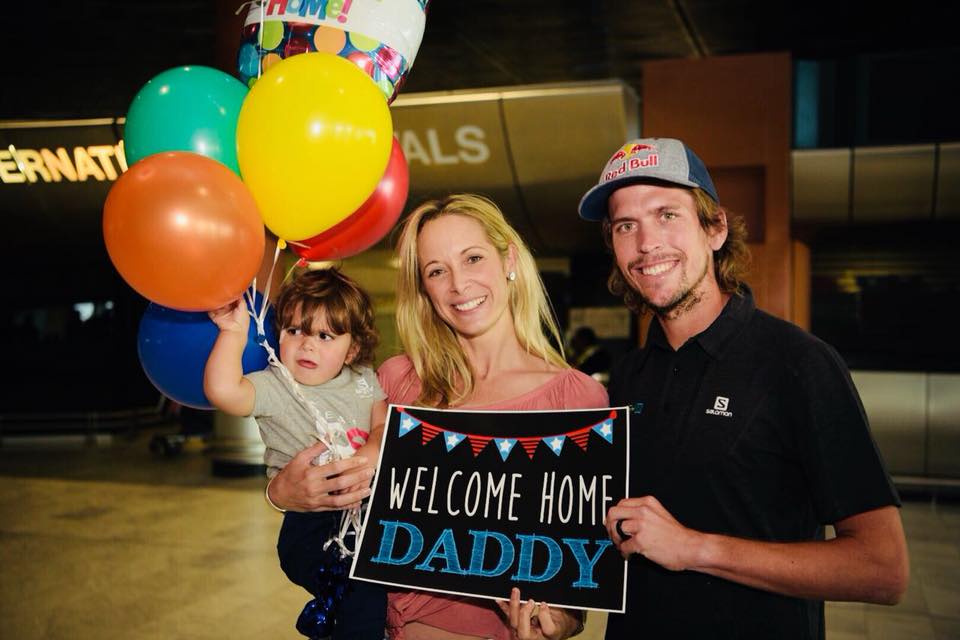 Behind every record is a story of dreams, work, perspiration, fails and a rock-solid support system. They’re often not the pretty or exciting parts, and so slip by unnoticed as we zone in on the excitement of the end. That’s at least what happened to me as I followed Ryan Sandes and Ryno Griesel’s GHT attempt. I read all the updates and watched all the clips enthralled by the excitement of the adventure, without fully realising the bigger picture of the attempt. During a Twitter scroll, I happened on a tweet by Vanessa Sandes, Ryan’s wife

Well, they are alive… that’s about all. 😖 They are moving but slowly. The elements have really smashed them. From -15 degrees with a wind-chill factor of another -15 degrees, enduring snowstorms & snow burn, & more recently 35 +degrees of intense heat & humidity.

It made me realise that while Ryan and Ryno were in the throngs of a massive attempt, they had families and support systems thousands of miles away from them back home, missing them and cheering them on while worrying about their safety.

No man is an island and attempts like that are rarely done in isolation. Usually there’s a rock-solid support team that enables people to go after their crazy dreams and conquer them.

Having had spoken to Ryan and Ryno before they left and Ryan after the record breaking attempt, I wanted to hear from the other side, the families. So I asked Vanessa  Sandes to share what it was like watching it unfold from afar while juggling motherhood, a career and day to day tasks.

The first thing I learnt was that the FKT attempt wasn’t something dreamed up on a whim. It was a thought, then a dream, and then a plan that came together over 4 years; and Vanessa had no idea what the attempt actually meant until they were in the midst of the attempt.

“The first time [Ryan] mentioned it, it must’ve been about 4 years ago, and I didn’t take him too seriously because he’s always got wild and wonderful ideas. He has such a wonderful imagination, and always wants to inspire people and do exciting things and live a fuller life. About 3 years ago he mentioned it again and was a little more serious. I thought it was an amazing idea, but I think in hindsight I had no idea what he was actually taking on. Even the week before he left I don’t think I knew entirely what he was taking on. It was only during the actual attempt that I realised that their lives were potentially in danger and that they were doing something pretty extraordinary. It was a whole phase of feelings. It was only during the actual attempt I got very nervous because they had two serious life-threatening scenarios. That was pretty scary to go through.”

The two life-threatening situations were in the Dolpa region in the early stages and in the final stages when Ryno’s health was in serious danger.

“When they were in the Dolpa region they had absolutely no cell phone reception. We [were able to] track them because their tracking device works through satellite signal, not phone signal. We could see where they were, and we knew the area was pretty snowed in and that nobody had crossed through this season. Nobody goes there in the winter, it’s just not safe. Ryno and Ryan were the first two humans to cross through since the winter. There were a number of hours they didn’t move. The dot stayed in one place, and it was during the day and I wondered if they were ok. You kind of constantly worry. Only after they got out of the Dolpa region, four days later did it become apparent just how serious it was. Ryno had gotten frost bite from trying to navigate as navigation was impossible because there were no paths, everything was covered in litres of snow. [Then] They got to a village where they had planned on sleeping and there was no one there, the village was locked up and there was nowhere for them to stay. [They eventually] found a monastery and knocked on the door at 10pm at night and begged them to let them in and give them some food to keep them warm. Back home we had a feeling something wasn’t right.

There was another occasion where Ryan phoned me from his Nepalese phone and said that Ryno’s really not doing well. He was very concerned about the well-being and health of his running partner and for him to phone me from so far away was scary because he wouldn’t do that if it wasn’t serious. Ryno pulled through, he’s a phenomenal athlete and one of the mentally strongest people you’ll ever meet.”

Vanessa had limited contact with Ryan throughout the 25-day attempt, when he was able to get cell phone signal and was able to track him every step of the way through the tracking system, which she says “certainly did calm my nerves as you could see exactly where they were 24 hours a day and I generally heard from them when they stopped to eat.”

Despite the distance, Vanessa was able to speak to Ryan more on this trip than when he and Ryno did the Grand Drakensburg Traverse.

“I didn’t hear from them at all for nearly 3 days as the Drakensburg is even more remote than Nepal. There are no villages at height in the Drakensburg whereas in Nepal there are a few villages peppered up high.”

While Ryan was trekking across the Himalayas, Vanessa was back home juggling looking after their son Max, working and managing Ryan and Ryno’s social media. When asked how she managed, Vanessa is refreshingly open and honest.

“I don’t want to sit and feel sorry for myself or have a big fat moan. To say it was challenging is an understatement. Ryan travels a lot, but we’ve never been apart for as much as this trip. He was away for 5 weeks of which luckily, I had my mom with me for 12 days. But 12 days out of 5 weeks isn’t much and I found it really overwhelming. Our son Max is the most divine little boy, so happy and well-adjusted but he’s a toddler so he’s full on at 280km an hour, no stop button. We don’t have a full-time nanny and I have a full-time job. I’m still acting, I still go to TV commercial castings, I still film tv commercials, I still record voice overs and I have my own digital marketing agency which is a full-time job. I have several clients which I must keep happy. Juggling everything wasn’t easy it was a stressful period”.

She credits her mom for helping her for two weeks for keeping her sane “I’m ever so grateful that my mom was able to come for almost 2 weeks. I don’t think I would be in one piece if she hadn’t…I just had to manage and juggle everything and make things work while Ryan was away. He’s just such a hands-on dad so when he’s away it’s super tough. I don’t have any family in Cape Town, so it was challenging but we made it work”.

One of the toughest moments for Vanessa was having to be the voice of Ryan and Ryno in the face of some harsh social media scrutiny.

“An expat who lives in the Himalayas had issue with the route that Ryan and Ryno were running. She took umbrage to this and basically lambasted them all over social media where they really didn’t have the opportunity to defend themselves because they were in the middle of their attempt and I had to manage all of it from the ground in Cape Town. I found it particularly stressful because I’m personally vested in the whole project, particularly because Ryan is my husband, so seeing people question his integrity and intentions was highly stressful and sad for me”

When Ryan and Ryno completed their attempt breaking a new record, despite health problems, tummy issues and a huge lack of sleep, Vanessa was filled with relief and pride.

“The magnitude of what they’d done really hit home all of a sudden. I never ever thought it was going to be a given, Andrew Porter the guy who set the solo record on that route almost two years ago is a phenomenal athlete and mountaineer so by no means was his record easy to beat, so I’m very chuffed for the guys”

As for what she wants her son Max to take from all of this, a career as a professional athlete is not on that list.

challenge yourself, get out of your comfort zone and do something extraordinary

“Nothing except pride please, I do not want my son to become a professional athlete of any sort. I’m not being negative about the professional sporting industry but it’s a very tough one. It opens a lot of doors and gives you many opportunities and you see the world and it’s amazing and you inspire people but it’s an intense job as well. I know Max will be super proud of his dad one day when he understands everything that Ryan has done. I know he’s going to look up to him for inspiring people to live fuller lives. I’m not saying that everybody should go run across the Himalayas like Ryan did, but challenge yourself, get out of your comfort zone and do something extraordinary. If you’ve never travelled before, save up the money and go somewhere special and somewhere that really resonates with you. If you’ve always been scared of something or you’re somebody who doesn’t like scary challenges set yourself a crazy goal like sky diving and go and do it”.

Some answers have been condensed for clarity